Private First Class Stribling was a member of Weapons Company, 1st Battalion, 7th Marines, 1st Marine Division. He enlisted in the United States Marine Corps on January 23, 1953. He died in Korea from other causes on March 4, 1954. He was returned to the United States and was buried at Highland Cemetery, Sparta, White County, Tennessee.

The Tennessean, November 14, 1970
Joe Stribling, 71, died Tuesday in Tucson, Ariz., and he will be buried here today beside his wife and Marine Corps son in a cemetery he liked better than he ever saw. The story began back in the early 1950s when the Striblings live don top of Cumberland Mountain on a farm near Pikeville. Word came that their youngest child, Marine Corps Pfc. Edward Stribling, 19, had been killed in Korea. Mr. and Mrs. Stribling decided they didn’t want to bury their son in any cemetery they knew about near Pikeville, and while his body was being shipped home, they drove their car across the state looking for a suitable burial place. “They told us when they came here that they had driven all over Tennessee and they liked the cemetery at Sparta better than any they ever saw,” said J.V. Sherrell of Hunter Funeral Home. “They never lived in White County, but they said they liked Highland Cemetery and bought four lots – one for the boy killed in service, two for themselves and another for a son who never married,” Sherrell said. The Striblings continued to live on the mountain until 1955 when they moved to Tucson and where Mrs. Stribling died June 7, 1969. She was buried by her son. Stribling, a native of Lawrence County and a coal miner before he took up farming, died in Pima County Hospital in Tucson. Survivors include two daughters, Mrs. Dorothy Sturgill, Tucson and Mrs. Joyce Davidson, Eloy, Ariz.; three sons, Grand and Howard, Tucson and Jack Stribling, Tusa, Okla.
Pfc. Edward Stribling was killed when a mortar Shell exploded during a demonstartion. 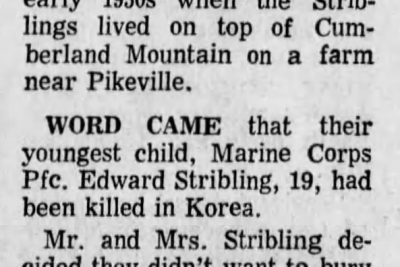 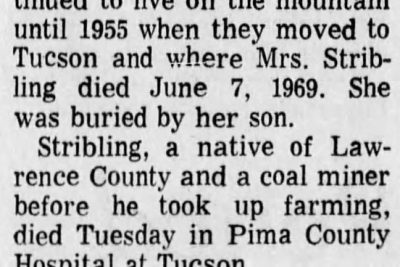