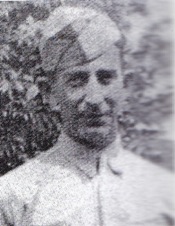 He joined the U.S. Army on September 13, 1928, and served with the 543rd Boat and Shore Battalion, 3rd Special Brigade in the Pacific Theater of War. Edward fought at Zamboaga, Philippines, and was killed/reported missing in action there on March 15, 1945. He was awarded a Purple Heart and his name is on the memorial wall at Manila American Cemetery in Fort Bonifacio, Manila, Philippines and at Arlington National Cemetery.

“Dad was a outdoorsman and loved his family. I never got to meet my father nor he me. I was the last born of his and Minnie’s children and the only boy.”
–Submitted by Thomas E. Swaggerty, his son