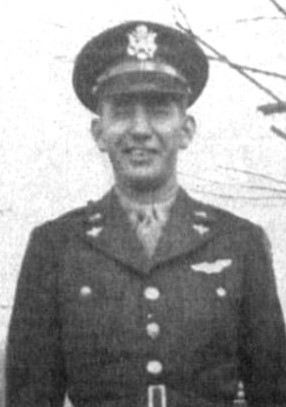 A former Wake Forest College athlete, Lt. Grooms attended the University of Tennessee for a year. He was employed in the Finance Department of TVA at the time he entered the service. He is survived by his parents, Mr. and Mrs. Oscar Grooms, his widow and a 20-month old son, Edward Wayne Grooms, all of Knoxville

The Knoxville Journal, March 5, 1944
Second Lt. Edward C. Grooms, 23, son of Mr. and Mrs. Oscar Grooms, of 1055 Cottrell Street, Knoxville, has received his navigator wings from an AAF Training Command and has been commissioned second lieutenant.

Lt Edward C. Grooms was a navigator on aircraft B-24J with serial number 44-40154. On 29 May 1944 the aircraft departed from N. Pickenham on a bombing mission to Politz, Germany. On the return from the mission the aircraft was losing altitude over the North Sea when two or the engines failed. The crew was forced to bail out and Lt Grooms, together with 8 other crew members, were rescued by the Air Sea Rescue boat. Only the Bombardier 2nd Lt Henry G. Muller didn´t survive. The Air Sea Rescue boat searched the area but failed to find him.

Lt Grooms died non battle a few months later. They had to ditch their aircraft, B-24H with serial number 42-50580 while on a practice mission, and it was lost in the North Sea.

The Knoxville Journal, December 8, 1944
Lt. Grooms, son of Mr. and Mrs. Oscar Grooms and husband of Mrs. Dorothy H. Grooms, Cottrell Street, was killed when his B-24 bomber was shot down over the North Sea Aug. 16, 1944. He was buried at Cambridge, England. He received the Air Medal, three Oak Leaf Clusters and the Bronze Star. He was formerly with the Finance Department of TVA. Survivors include a son, Edward Wayne Grooms. 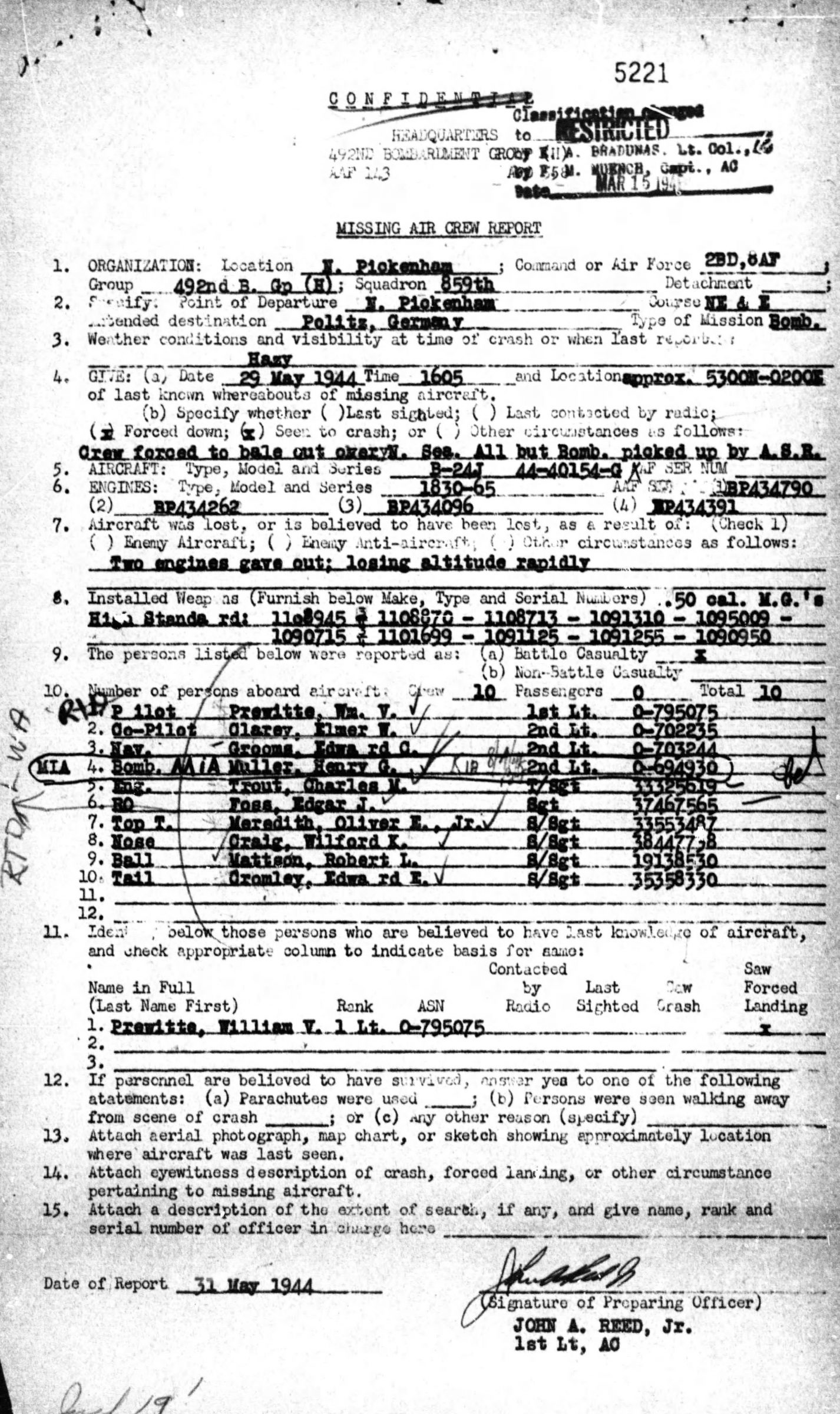 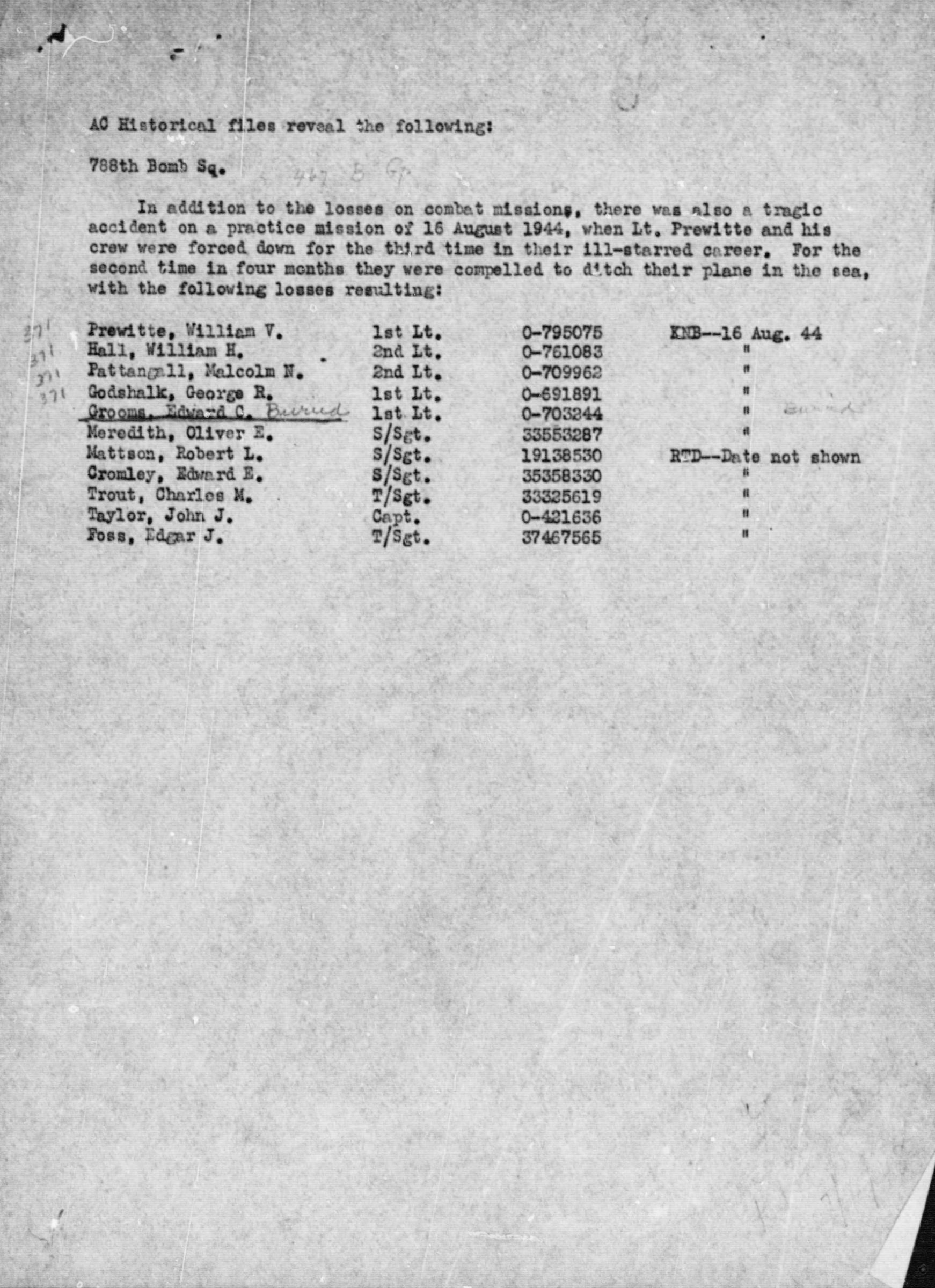 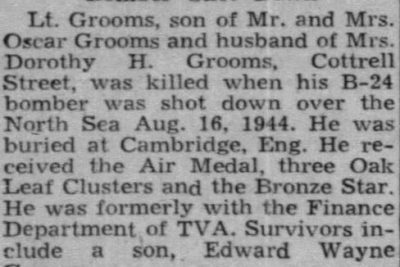 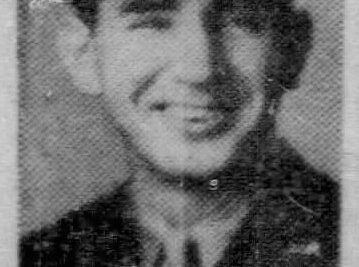 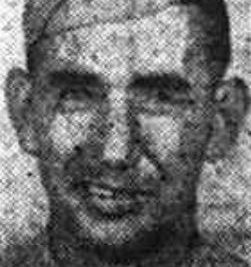