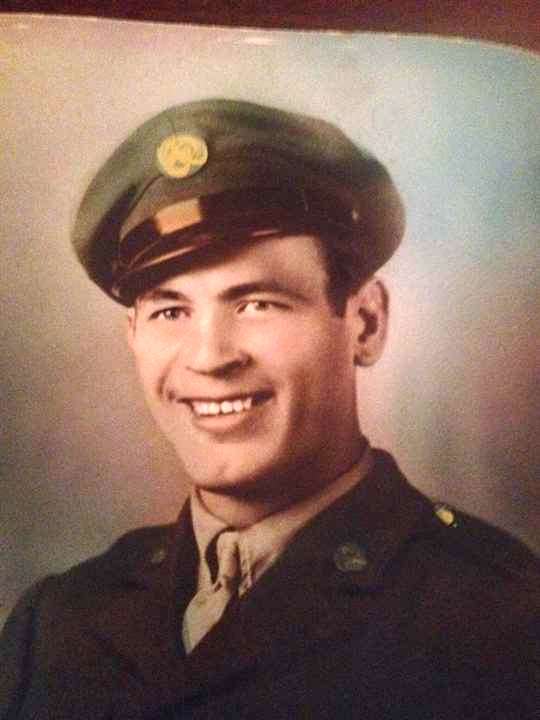 ELIZABETHTON — Although his body is buried on another continent, thousands of miles from his home, Earl Paul Cooke’s family never forgot him. Last month, through several coincidences, Cooke’s family learned his grave has been lovingly and respectfully cared for by a Dutch family. Jimmy Hilgen, a Dutch police officer, said he wanted to care for two American graves “because of my gratitude to the fallen men from far away who gave their lives for our freedom.”

One of those graves belongs to Pvt. Earl Cooke, who was assigned to the 99th Squadron, 84th Air Service Group and died on Oct. 25, 1944. He is now buried at Henri-Chapelle American Cemetery in Belgium, near the Dutch city of Maastricht. His grave was adopted by the Hilgen Family in May 2015. Hilgen said a grave and missing person adoption program was established just after World War II ended He said the program was started “by Dutch citizens who wanted to pay their tribute and gratitude to the U.S. troops who liberated them from the Germans.” He said those who adopt the graves are required to visit the grave of their adoptee a few times a year and “maybe lay some flowers.”

Hilgen said he and his wife and their 7-year-old daughter, Noémi, and 5-year-old son, Fynn, regularly visit Cooke’s grave “and he’s a part of our family now. I’d also like to let my children know that the freedom we have nowadays didn’t come without any bloodshed and that people from far away gave their lives for our freedom.”

But as much as the Hilgens considered Cooke to be part of their family, he was still almost an unknown soldier to them. At first, all the information Hilgen had was a headstone inscription and internment record from the cemetery. From that, Hilgen obtained Cooke’s service number, the name of his father, Dillard Cooke, and that he was from Tennessee. He obtained a few more fragments of information from the Fields of Honor database on the internet, including the name of his mother, Vertie O. Ward, and that he was born in 1915 and had one brother and some sisters.

Hilgen was frustrated by the slow pace of searching for more information through regular channels, so he reached out to local newspapers in hope that some of Cooke’s family could be located and a photograph might be sent to him. He contacted me by email on Nov. 25. My immediate response was to forward his request for information to Dawn Peters of the Watauga Historical Association. Peters has a very deep understanding of the family histories of Carter County and is always ready to work on solving historical mysteries.

When Peters learned the names of Cooke’s parents, she began to suspect she might be one of his relatives. Her family came from Beech Mountain, N.C., and she thought Cooke’s mother and father were also from there. She also initiated a search on her Facebook page and on the Watauga Historical Association webpage requesting her many followers to provide any information and a photograph of Cooke.

One of Peters’ close friends who joined the search was Lisa Germaine. She also suspected she may be related to Cooke through the same connection between the Cooke and Trivette families. The problem was that none of Earl’s family had remained in Tennessee and no one knew where they were.

Just a couple of days after the search began the mystery was solved by a remarkable coincidence. Peters and Germaine were talking to each other on the phone while looking at their family trees on their computers. Out of nowhere a new listing appeared on Germaine’s family tree on Ancestry.com. One moment it wasn’t there, and then it appeared.

Intrigued, Germaine clicked on the new listing and realized she had found Earl Cooke’s niece. She told Peters what had just happened and she immediately got in touch with the woman whose name had just popped up on her computer screen, Judy Matthews, who now lives in Florida.

Matthews told Germaine that after the war, the entire family had moved to Akron, Ohio, to work in the rubber plants. She was born after the war, but remembers her family talking about what a handsome man Earl had been and how he had a very outgoing personality, like his surviving brother. Matthews mother was Earl’s sister. She said the family had hung Earl’s picture in the living room and she even had a photograph made in 1952 of the entire family gathered around Earl’s picture. Remembering that one of the main things Hilgen had been seeking was a photograph, Germaine quickly asked Matthews if the photograph survived. Remarkably, the photo had, and Matthews quickly emailed a copy to Germaine. It was not the typical tiny black and white picture soldiers usually made in World War II. This one was a color picture made by a professional photographer.

Another remarkable coincidence was that Matthews had just had her DNA test done at the beginning of Hilgen’s search. If the search had been done any earlier, the searchers might not have found Matthews. Soon, Hilgen had the photograph he had been seeking and also information from Matthews that her uncle had died in an accident when he was hit by a truck in October 1944.

Cooke’s photograph is now displayed in Hilgen’s home, along with two other World War II American soldiers he has adopted. He said they “are now a part of our family. My children know and talk about them and my wife Wendy and I think it’s a very honorable thing to keep the spirits alive of the men who fell for our freedom.”

Hilgen said his family celebrated Christmas Eve with a candle ceremony at the Canadian War Cemetery in Groesbeek, near their home. “All 2,617 graves got a candle and were lit by grownups and children. Our children also put some candles at Canadian graves and more than 600 people showed up.”

Earl Cooke may be buried thousands of miles from his home, but the Hilgen Family will make sure it has flowers and an American flag on Memorial Day and other times during the year. 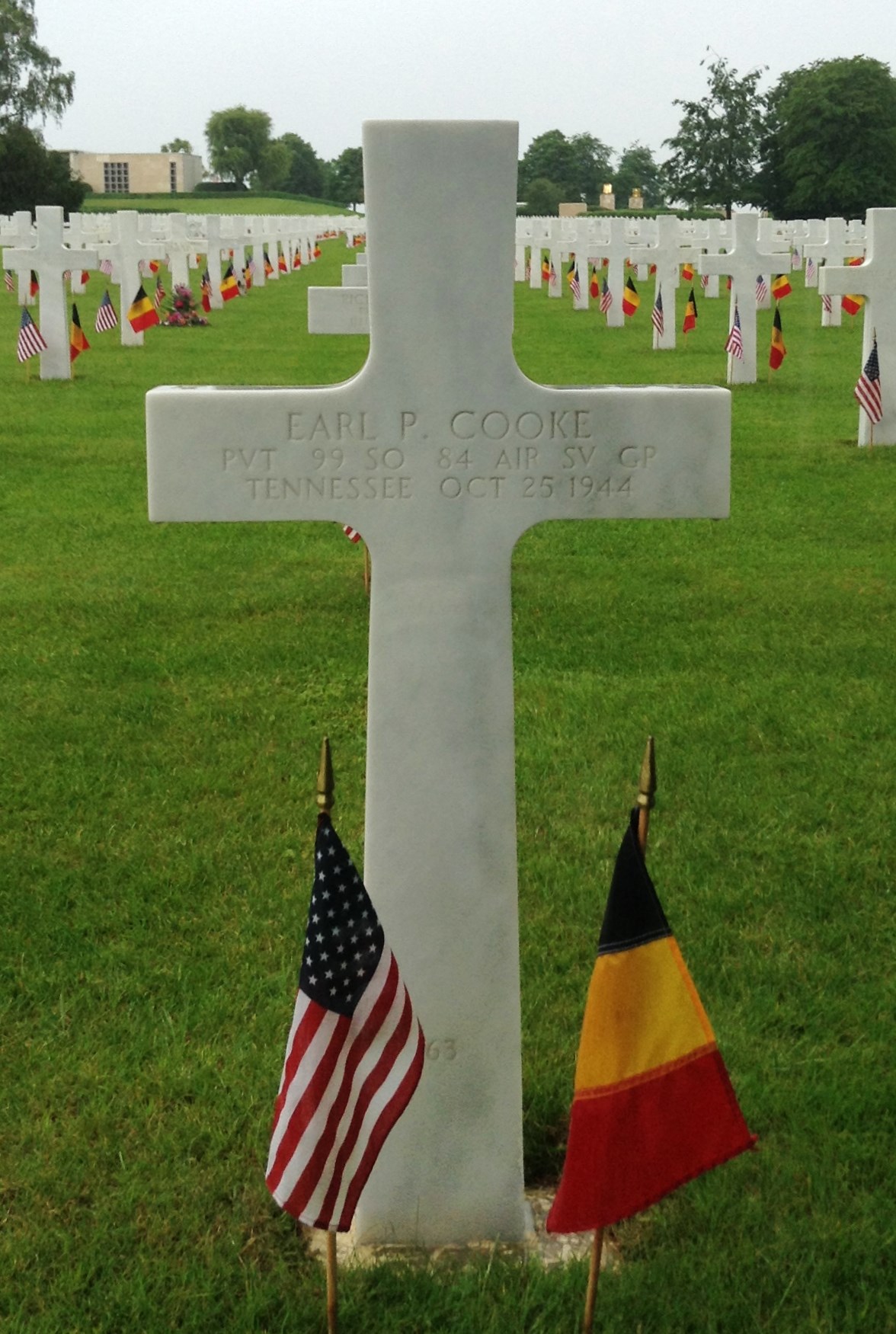 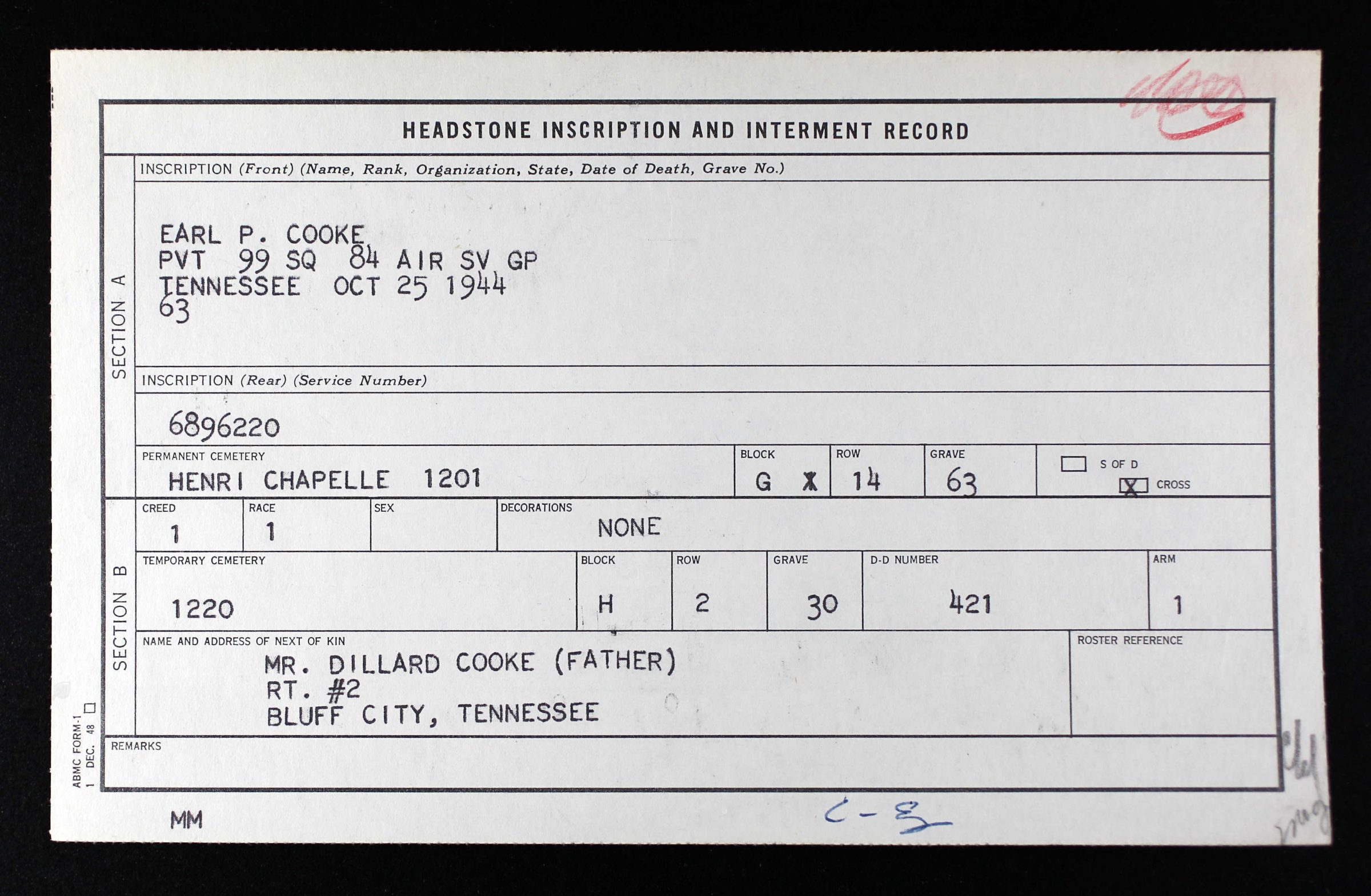