The Knoxville Journal, July 24, 1943
Oliver Springs, July 23 – The body of Pvt. Earl H. Edwards of Oliver Springs, who was accidentally shot in a restaurant near Jacksonville, Fla., Monday, has been removed to Sharp’s Funeral Home here. Private Edwards was returning to Eglin Field, Fla., where he was stationed, after attending the funeral of his father here. He stopped in the restaurant and an unidentified woman fired a gun killing him instantly. The circumstances of the shooting were not revealed. Private Edwards is survived by two brothers, Alvin, U.S. Air Corps, and Leonard Edwards and his mother. 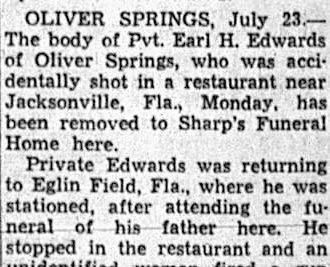 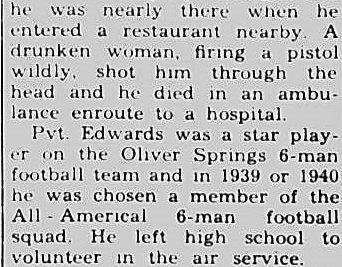