Died 23 March 1943
He is memorialized at the North African American Cemetery, Carthage, Tunisia

The Kingsport Times, 2 July 1944.
The Silver Star and Purple Heart awards won by PFC Earl C. Lane have been received by his parents, Mr. and Mrs. Lloyd W. Lane of Fall Branch, Tennessee. PFC Lane, 22, had been overseas six months at the time of his death, received the Silver Star for gallantry in Tunisia, where he volunteered to take a half-track loaded with high explosives and armor-piercing ammunition to a company almost surrounded and without ammunition. This mission he completed under intense enemy artillery tank and small arms fire. 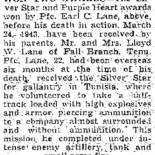