The Kingsport Times, 27 February 1968
Young City Lieutenant War Victim. Lt Douglas Burem Wade, 19, of Kingsport, has been killed in action in Vietnam, his family was notified Sunday.
Lieutenant Wade was the second Kingsport officer reported slain in Vietnam in the past week. On Saturday, Capt. James Reed was listed as killed in fighting in the Mekong Delta after being listed earliers as missing.
His mother, Mrs. Julia Burem Wade of 1316 Midland Drive,  was notified Feb. 14 that he had been missing since his unit, Battery A, 321 Artillery, 101st Airborne Division, engaged a hostile force in a firefight during a combat operation Feb. 9. He had been in Vietnam since December, and had been in service since graduating from Dobyns-Bennett High School in June, 1965. After receiving basic training at Ft. Benning, Ga., he was assigned to Electronics School at Frt. Monmouth, N.J.
He was admitted to Officers Candidate School at Ft. Sill, Okla., where he received his commission in June 1967, as the youngest candidate in his class.
Following paratroop training at Ft. Benning, he was assigned as educational officer at Ft. Campbell, Ky., receiving further training in the educational field at Ft. Knox, Ky., Elgin AFB, Fla., and Ft. Bragg, N.C. He left t. Campbell for Vietnam Dec. 12.
He was the nephew of Dr. Henry S. Burem of Kingsport and the grandson of the late Mr. and Mrs. James P. Burem of Burem, Tenn. He is also survived by one sister, Mrs. Sally Ann Demuth of Huntsville, Ala.

His father was the late George Douglas Wade, a veteran of World War II, who died when Lt. Wade was 12.
A picnic area at the Presbyterian Youth Camp, Banner Elk, N.C., where Lt. Wade worked during the summer prior to his senior year at D.B., will be named after him when completed. 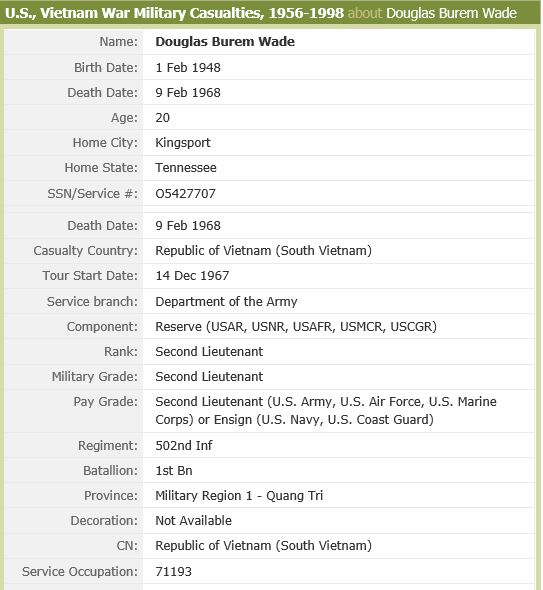