The Knoxville Journal, February 11, 1945
Mrs. Obie Collins has been notified by the War Department that her brother, Pfc. Denver Hollingshead, 25, was killed in action Jan. 3, in Belgium. He entered the Army in October, 1942 and had been overseas since April, 1943. He saw action in North Africa, Sicily, France, Germany and Belgium. He had won the Purple Heart and Presidential Citation. A brother, Ralph Hollingsheas is with the Engineer Corps in the Dutch East Indies. Another sister, Mrs. Grace Tucker, lives in Oak Ridge.

Mrs. Bessie Collins of Tellico Plains has been notified that the body of her brother, Pfc. Denver Hollingshead, is en route home for reburial. Pvt. Hollingshead 25, was killed in action in Belgium on Jan. 3, 1945. He served 20 months overseas, with the Second Army Division and was awarded the Purple Heart. 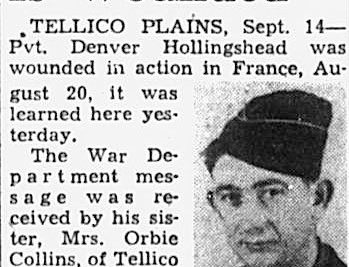 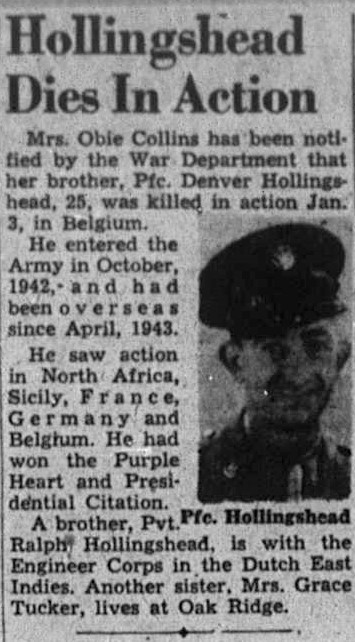