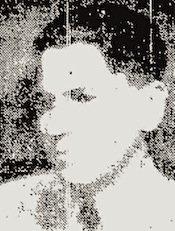 Kingsport News, 16 January 1943
J.H. McCracken of Kingsport has received notification of the death of his son PFC Delmar Allen McCracken who was serving with American forces in the Latin-American area.
Word came in a telegram from the War Department which stated that the 22-year-old soldier, was drowned Sunday. Full particulars are to follow in a letter, the telegram stated.
McCracken had been in the Army for over two years. He was employed at the Bristol CCC camp before enlisting in the service.
Two brothers, Ralph and Robert McCracken, are in the army. Other survivors in addition to the father are three brothers, J.W. and Howard McCracken, Baltimore and Elmer McCracken, Johnson City. He also leaves five sisters, Mrs. Charles Dulaney, Mrs. Bertha Barr and Mrs. Bruce Wine, Johnson City, Mrs. Joe Hamlett, Jonesboro, and Mrs. Claude Foster, Arkansas.

The Kingsport News 31 March 1948
Among 1,150 due at San Francisco aboard the troup carrier Honda Knot from Central America will be the body of PFC Delmar A. McCracken, whose next of kin is listed as John H. McCracken, Robert E. Lee Apartment 64, 602 Dale Street.

The Kingsport Times, 18 May 1948
Funeral services for PFC Delmar A. McCracken, Robert E. Lee Apartments, will be held Wednesday at 2:30 p.m. at Huff Funeral Home Chapel with the Rev. E.L. McConnell officiating. Burial will be in Pyle Cemetery, Charles Dewitt Byrd Post, VFW, will be in charge of grave services. The body will arrive in Kingsport today at 2:30 p.m. 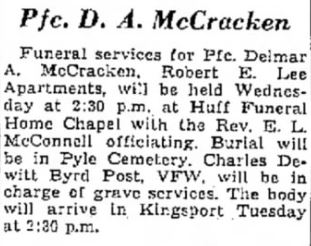