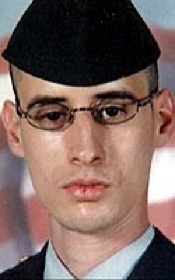 JOHNSON CITY, Tenn. — A Tennessee soldier who died in Iraq was carrying on a family tradition of military service, relatives said.

The Army announced the death of 22-year-old Pfc. David L. Potter of Johnson City on Monday. They released no information about Saturday’s death except that it was “non-combat related” and under investigation.

“The only thing I really know is that we’ve got a lot of pride in him,” said his older brother, Carlton Potter of Sevierville.

David Potter was born in Portsmouth, N.H., but graduated from Gatlinburg-Pittman High School in Sevierville and enlisted in February 2003. He had been living in Johnson City as a sophomore art student at East Tennessee State University. He was not married.

“My father was in the Air Force, and I was in the Army,” Carlton Potter said. “He felt like he wanted to try it and do what we had done.”

David Potter originally enlisted as a reservist to pay for college, recruiter Sgt. Rusty Hicks said. But Hicks said Potter thought about it becoming a career.

“He was an asset, the way we saw it,” Hicks said. “It was good for him and good for the Army.”

Potter arrived at Fort Hood, Texas, on New Year’s Day and deployed to Iraq in March, his family said.

“He said the reason he put on his uniform was so we could sleep safely at night,” his brother said. “That’s what he said kept him going.”