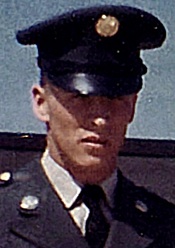 David Lee Edney “Toby” and my husband were the best of friends. They met in some of the schools they had to go through. Both were airborne “skysoldiers”. They were stationed at Ft. Bragg together and we would all come home for the weekends. Toby lived in Erwin, TN, and us in Harriman, TN. We stayed at the Edney’s, and Toby stayed with us in Harriman. Toby went over to Vietnam in Dec. 1967 with the 101st Airborne, and Jerry went in Feb. 1968 with the 173rd Airborne Birgade. Toby got KIA 13 March 1968 and Jerry was his escort home. Jerry left to go back to Vietnam 13 April and he got KIA 13 June 1968. I got pregnant with our son while Jerry was in and had him 24 Dec. 1968 and named him Jerry Lee after his daddy and Toby.
–Submitted by Judy Ferguson Scofield