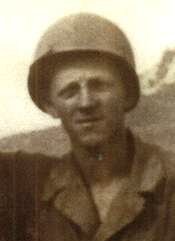 Private First Class Daniel (Bud) Ross Lambert was born in 1928. He was the son of Floyd and Jennie Lambert of Stockbridge, Georgia, formerly of Maryville, Tennessee. Daniel attended Everett High School before volunteering for service in the US Army. He entered the service in September 1950 and took basic at Fort Belvoir, Virginia before being sent to Japan and later to Korea.

He was a member of the 10th Engineer Combat Battalion, 3rd Infantry Division. He was killed in Action while fighting the enemy in North Korea on October 4, 1951.

Private First Class Lambert was repatriated and returned to his hometown of Maryville. The funeral was held December 20, 1951 at Six Mile Baptist Church and burial was held at Liberty Cemetery in Maryville. Veterans of Foreign Wars Post No 5154 were in charge of services at the graveside.