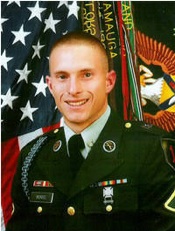 CLINTON – It’s been a long time coming, but it had to be done right, said the mother of a man killed in Iraq nearly three years ago.

Morris died November 25, 2006, when a roadside bomb exploded next to his Humvee in Iraq. He was 28 and had just re-enlisted for a second tour of duty. He planned to later become a minister.

The bust, atop a 3,400-pound pedestal of black granite, now stands guard next to the Anderson County Courthouse near memorials to other county sons and daughters killed in wars.

It’s the first lasting memorial in Anderson County to those who have lost their lives in the wars in Iraq and Afghanistan.

The bust was first unveiled in church ceremonies last November. Sgt. Morris was a member of the Army’s 1st Cavalry Division, and his bust includes the standard Stetson worn by those soldiers.

But a fellow soldier noticed then that something wasn’t quite right, recalled Sgt. Morris’s mother, Amy Morris of Clinton.

She said she was told the strap on the back of the Stetson was set too low. So back to the Utah foundry it went for recasting. A second effort also was deemed unsatisfactory, but the third try passed muster.

She said local residents contributed more than $6,000 to pay for the pedestal.

“I feel very honored that the community has come together like they have and shown their appreciation and dedication to soldiers,” she said. “I know they’re a family, and I know Daniel would be honored.”
By Bob Fowler, Knoxville News Sentinel, July 18, 2009

Clinton Man Killed in Iraq
Knoxville News Sentinel
By Bob Fowler, 28th of November 2006.
Clinton: A Clinton resident who had recently re-enlisted in the U.S. Army died Saturday in Iraq from injuries he received when an improvised explosive device detonated near his vehicle.

Army Staff Sergeant Daniel Marshall Morris, 28, was a seven-year veteran on his second tour of duty in Iraq.
Military personnel from Fort Campbell Kentucky, told family members of Morris’ death early Sunday morning.
“Not only was he my brother and a father and a son, he was the best man I’ve ever known,” said Morris’ 25-year-old sister, Cassidy Morris. “He wore the weight of the world on his shoulders every day.”
Details of Saturday’s incident are limited, but it is reported to have occurred in the volatile Diyala province, a hotbed of Iraq’s Sunni-Arab just northeast of Bagdad.
Morris was in a Humvee when the homemade bomb exploded and two other soldiers in the vehicle were wounded, according to initial reports.
Morris served as an infantryman and was assigned to A Company, 1st Battalion, 3rd Brigade Combat Team, 1st Calvary Division based at Fort Hood Texas.
He was a 1996 graduate of Clinton High School and is survived by his young daughter Alexys Morris of Pigeon Forge.
Other Survivors include his father and mother, Glen and Amy Morris his sister Cassidy Morris and brother Adam Morris, all of Clinton. Grandparents Ava Anderson and Carl and Billie Morris also of Clinton, also survive.
Funeral arrangements to be handled by Holly Gamble Funeral Home of Clinton, are incomplete. Burial with full military honors will be in Oak Ridge Memorial Park. Morris is the 62nd member of the military from Tennessee to die in Iraq since the war began in March of 2003, according to an Associated Press database.