Dana T. York, was born in 1921 the son of Charlie and Luvernia (Crowley) York. Dana’s mother died soon after his birth and his father died while Dana was less than two years of age. Dorothy, a sister of Luvernia raised Dana from a child. He was born with a birth defect in his hand and at the outset of WWII he was denied entry into the US Army. Afterwards on his second try was admitted and enlisted on October 23, 1942. Pvt. Dana York was assigned to the 82nd Field Artillary Battalion which was assigned to Gen. Douglas MacArthur’s 1st Cavalry Division. In 1943 the !st Cavalry Division was sent to Australia for extensive training. In January 1944, the Battalion’s first engagement was at Oro Bay, New Guinea and from there moved to Los Negros and then on to the Admiralty Islands. Acting on reports from air reconnaissence Gen. MacArthur decided to move ahead with the assault of the Admiralty Islands. When a force landed on Los Negros on February 29, 1944 there was little resistance but soon it was apparent that it would be far from easy to defeat the Japanese and a furious battle ensued. The death of Pvt. Dana T. York is not noted from accomodations or citations but it is documented that Pvt. York was killed in action on March 5, 1944 in the battles of Los Negros and the liberation of the Momote Airfield. Seven years after his death Pvt. York was one of 39 unidentified soldiers killed in action in the battle of Los Negros who were shipped back to the U.S. for burial. On April 10, 1951 he and 38 other soldiers who lost their lives in this battle were buried together in the Jefferson Barracks National Cemetery, St. Louis, Mo.

YORK, DANA T. The funeral of Dana T. York, formerly of Scott county and killed in the Pacific on March 5, 1944, will be held in St. Louis, Mo., April 10, interment in the National Cemetery. He was the son of the late Charlie York of this county. York was one of 39 unidentified soldiers killed and shipped back to the U. S. for burial. Services will be 1100 a.m. April 10. Those wishing to send flowers should send them in care of Supt. L. B. Hellmeyer, National Cemetery, Jefferson Barracks, St. Louis, Mo. Source The Scott County News, 6 Apr 1951, p1 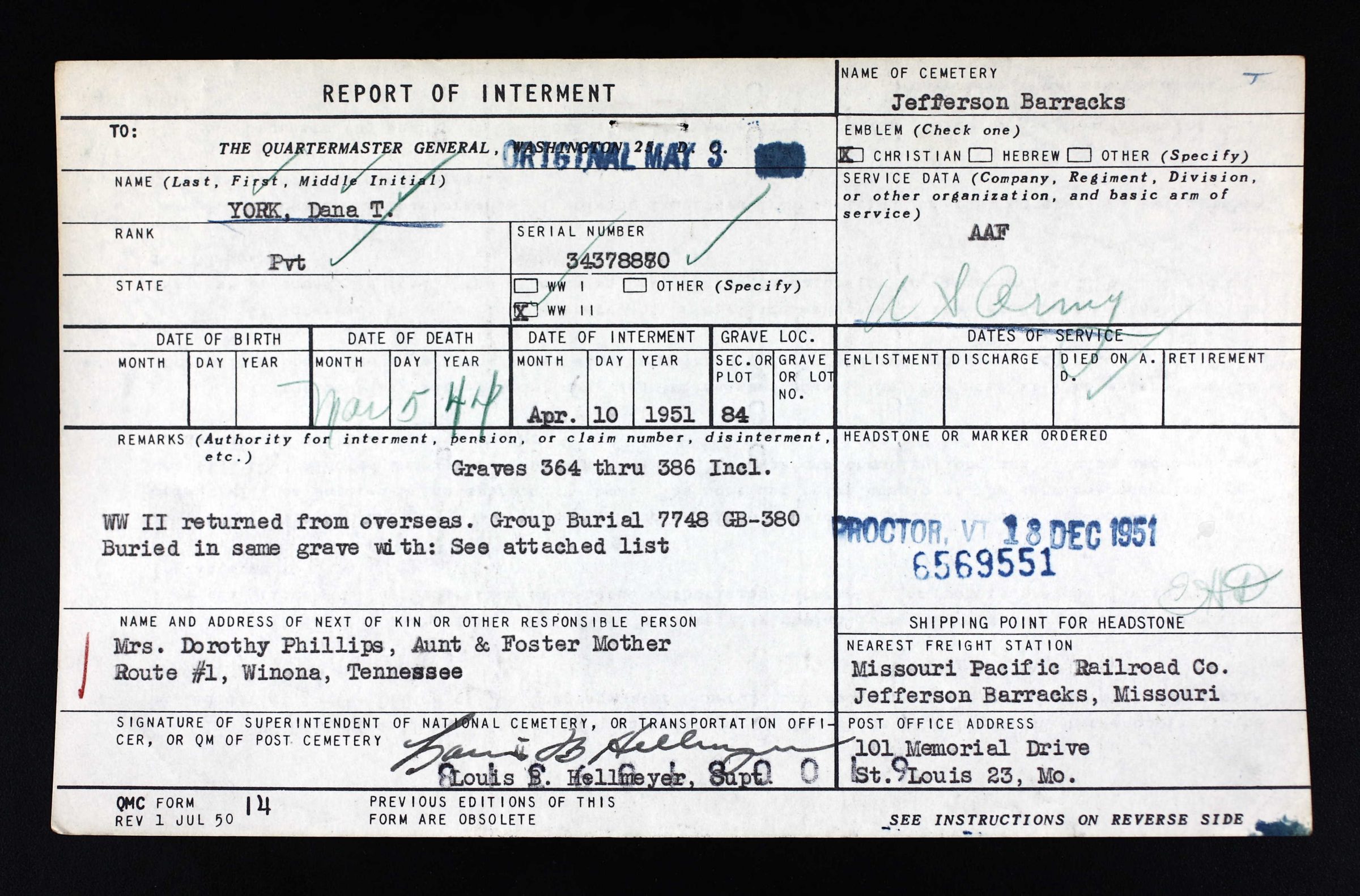