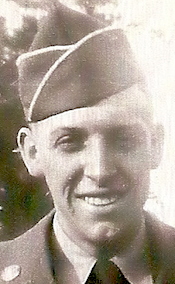 Dallas Honeycutt was the son of John Henry Honeycutt and Verna Sheets.

Private First Class Honeycutt was a member of Company A, 1st Battalion, 17th Infantry Regiment, 7th Infantry Division. He was listed as Missing in Action while fighting the enemy in North Korea. He was presumed dead on July 7, 1954. His remains were not recovered. His name is inscribed on the Courts of the Missing at the Honolulu Memorial.

Pfc. Dallas Honeycutt of route , Johnson City, Korean War veteran, has been officially proclaimed dead by the Army, according to a message received by his widow, the former Isabel Bales.  Honeycutt was reported missing in action July 6, 1953, in Korea. He enlisted in the Army October 10, 1952 and took basic training at Fort Jackson, S.C., before going overseas. Prior to his entry in the service, he was employed at the H.T. Cowan Lumber Company. Honeycutt is the son of Mr. and Mrs. John Honeycutt, formerly of Johnson City, but now of Baltimore, Md. 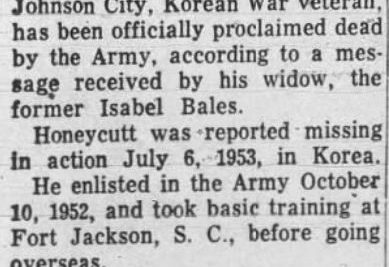