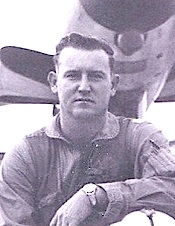 Major Dale Alonzo Johnson was born on September 17, 1929, and was originally from Elizabethton, Tennessee. He served his country in the Vietnam War in the United States Air Force, as a pilot in 333rd Tactical Fighter Squadron, 355th Tactical Fighter Wing, 7th Air Force. He was a sixteen-year veteran of the Air Force, and a previous veteran of the Korean War, when he began his tour in Vietnam. On October 27, 1966, Maj. Johnson was piloting an F-105D jet that was shot down over North Vietnam; he was listed as Missing in Action as his body was not recovered, but was presumed dead from the incident, at the age of 37. Maj. Johnson is memorialized at both Arlington National Cemetery in Arlington, Virginia, and on the Vietnam Veterans Memorial on Panel 11E, Line 119. 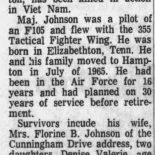 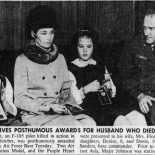