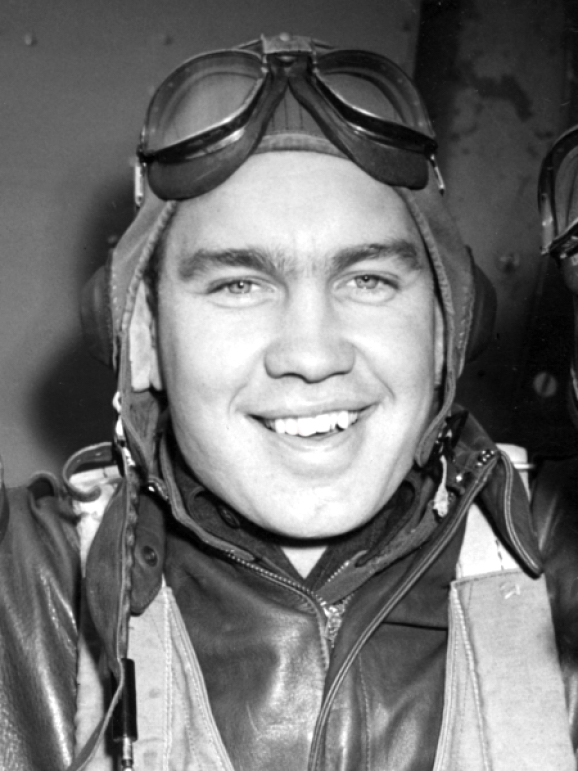 Major Clyde V. Knisley Jr. was the pilot of aircraft P-47D-30 with serial number 44-32747. He was on a group support mission to Diekirch area. He served in New Guinea and the European Theater of Operations.

Statement from 1st Lt Thomas P. Petit.
I was flying White Three position on a squadron mission on 19 January 1945 and Major Knisley was White Leader. We circled our target at 7,000 feet waiting for Browning and Schooner squadrons to finish bombing. The overcast was 10/10ths and the visibility was very poor. The ground controller finally gave us the word to go down and bomb and we headed down in loose trail. We broke out at 2,000 feet and because the visibility was still so poor we went down to a Thousand feet. Flak was light, intense and very acurate. While in the vicinity of Tandel, on the Luxembourg German border, I saw Major Knisley’s ship get a burst of flak in the fuselage beneath the cockpit. The ship shuddered and he called in that he had been hit badly. The fuselage began burning and the Major began a turn to go back out of the target area. The flame stopped momentarily and then there was a white puff and the whole ship from the fuselage back was aflame. The ship went off on its right wing and headed for the ground. At about 50 feet I saw the Major leave the ship and the next instant the ship crashed and exploded violently. I didn’t see Major Knisley’s chute blossom.