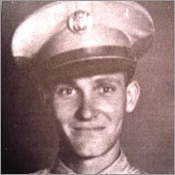 Clinton Wallace Thomas received multiple awards including the Purple Heart and Bronze Star. He was with the 142nd Infantry Regiment, 36th Infantry Division. He is memorialized at the Sicily-Rome American Cemetery, Nettuno, Italy.

MADISONVILLE (WATE) – A Monroe County family received some closure on Veterans Day for a loved one lost during a WWII battle in Italy.

Pvt. Clinton Wallace Thomas was listed as missing in action since 1944.

His family was told he may have died defending a bridge, but what really became of the soldier had always been unclear, until now.

The 20-year-old soldier’s dog tags were sent from Italy.

In a town close to Cassino on a rocky hillside, the tags were recently discovered by an Italian WWII researcher who contacted a Monroe County genealogy page host by email.

“It was important for me to bring him home so it was thrilling,” said Joy Locke, one of the Monroe County genealogy page hosts.

Along with the dog tags a letter was sent to the family and read aloud at the Veterans Day ceremony.

“I think that Clint, maybe, will be glad to be remembered after 66 years and that something of him is back home now,” a Monroe County official said.

Pvt. Thomas’ siblings have since passed away. The next generation said they will hold on tight to Thursday’s special moment and the personal piece of history sent back to them.

“I wish my dad and my uncle, his brothers, were alive to see the dog tags,” Thomas said.

Thomas received multiple awards including the Purple Heart and Bronze Star. He was with the 142nd Infantry Regiment, 36th Infantry Division.

His family was also given a proclamation read by state Sen. Randy NcNally and state Rep. Jimmy Matlock.