Private Clifford Newport was born on November 22, 1892 in New River, Tennessee. He was the son of Rebecca Newport. He had two sisters, Maryline Newport Griffith and Eva Newport, and three brothers, James Conklin Newport, William Barney Newport, and John Russell Newport. On February 27, 1916, he married Augustie Gustavia Farmer in Cumberland County. The couple had at least one daughter, Eula Mae Newport. Prior to joining the military, Private Newport was employed as a laborer by Bill Spencer & Sons in Rosedale, Tennessee. During his service in World War I, Private Newport served in the 52nd Infantry Regiment, 6th Division. He died of broncho pneumonia on November 6, 1918. He is buried in the Meuse-Argonne American Cemetery in Romagne, France (Plot D, Row 21, Grave 27). 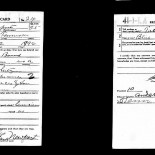 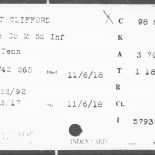 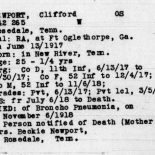 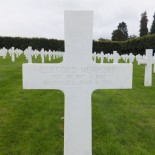 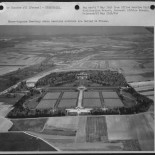