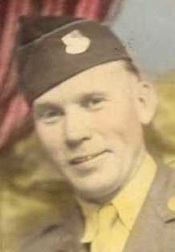 Private Cleaston “Pat” Patterson served in Company K of the 339th Infantry Regiment of the 85th Infantry Division. He trained with the division at Camp Shelby, MS and in Louisana and California. His army buddies gave him the nickname “Pat”. The 85th Division departed for North Africa in December 1943 and evenutally entered front lines in Italy on April 1944. The Spring Offensive began on May 11. Private Patterson was reported missing in action (MIA) on May 14, 1944. It wasn’t until 11 months later that he was finally declared killed in action (KIA).

Here is his story that he was not able to tell:
The 85th Division arrived in Italy in April of 1944 and was placed into the line south of Rome. The infantrymen gradually gained combat experience on night patrols. The big offensive began on May 11, 1944 with a heavy artillery barrage and then the Fifth Army went on the attack. During heavy fighting, Private Cleaston was reported missing in action on May 14th. Since he was alive the last time his buddies saw him, he was listed as MIA. His category was changed to Killed in Action (KIA) after 12 months, which was the same time the war ended in Italy.
-Don Vitelli