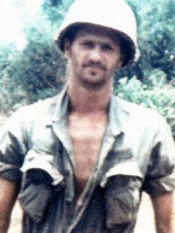 He was posthumously awarded the Bronze Star and first oak leaf cluster.

Son of J.C. & Maude Watson and husband of Dedria Harrill.

He was killed near the village of Van Thien, near Quang Ngai City.

Sgt. Watson was awarded the Bronze Star for action on May 25, 1968.
“Sgt. Watson, while serving as a platoon sergeant, was participating in a search and clear operation with his company near the hamlet of Chien Son when they received heavy intensive fire from a numerically superior force of North vietese Army soldiers.
“Although Sgt. Watson’s platoon was almost completely surrounded by the enemy, he led his men into an old enemy trench complex to establish a perimeter to repulse the enemy attack. Sgt. Watson continued to expose himself to the enemy fire in order to establish a fighting defense for his platoon. After establishing his men in the trenches, Sgt. Watson, with complete disregard for his personal safety, exposed himself to the enemy fire to adjust the artillery fire on the encircling enemy.
“He then moved through a deadly hail of enemy fire to the other side of the platoon to adjust the fire of supporting gun ships. Realizing that they were so outnumbered and that the enemy was attempting an all-out effort to overrun their position, Sgt. Watson remained calm and organized a rear-guard for coverage of the wounded and led his platoon from their positions by maneuvering through the abandoned trenches.
“Upon reaching a relatively safe position, Sgt. Watson set up an emergency landing zone and called for medical evacuation helicopter to evacuate the wounded. When this was accomplished, Sgt. Watson organized his men and led them back to the high ground to rejoin the now embattled company.
“Sgt. Watson’s courage, devotion to duty, and unselfish concern for his fellow man was in keeping with the highest traditions of the military service and reflected great credit upon himself, the Americal Division and the United States Army.”

“For heroism in connection with military operations against a hostile force in the Republic of viet. Sgt. Watson distinguished himself by valorous action on July 19, 1968.
“Sgt. Watson was participating with a task force in an assault of the hamlet of Con Chien. As the task force moved forward, they were met with intensive small arms and rocket fire which required the elements to move back and call in artillery and air strikes on the deeply entrenched enemy.
“Sgt. Watson, whose element was still in the landing zone, moved his men to the forward slope of the hill and deployed them to set up a covering fire for the withdrawing elements. Despite a withering hail of fire on their position, Sgt. Watson continually exposed himself to enemy fire while marking targets and directing fire to relieve the pressure on the withdrawing force. After the elements had closed back into the area, Sgt. Watson led his men to the sector of the perimeter assigned to them.”