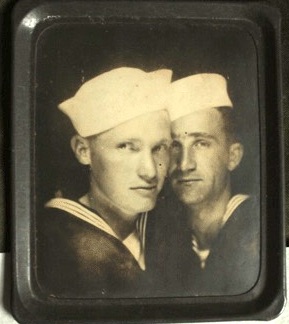 Featured image is a photo booth snapshot of Carden and his brother [it is unclear who is who]; below are a letter written by Carden to his mother and family roughly nine months before his death and the condolence letter including details of his death written by the senior surviving member of the crew. A fighter until the end, the Johnston sank below the oil-filled, burning surface of the sea. “How anyone could stay afloat as long as he did, I can’t even imagine. In the hell left over from that Herculean fight with Yamato and the Japanese Center Fleet, the survivors waited for rescue. The shark-infested, freezing waters brought his fight to a close… ,” writes the owner of the following website: http://www.usmilitariaforum.com/forums/index.php?/topic/234254-my-collection-tribute-to-those-who-fought-and-won-wwii/page-6