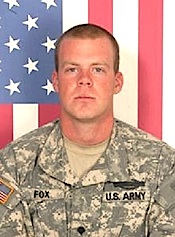 Specialist Christopher T. Fox was born on October 7, 1986 in Memphis. He attended Hamilton High School and then the Dr. Benjamin L. Hooks Job Corps Training Facility in Arkansas where he received carpentry training and his GED. Fox joined the Army in March 2005 and was sent to Fort Benning, Georgia for basic training. After training he was assigned to Fort Carson, Colorado to B Company, 1st Battalion, 68th Armor Regiment in the 3rd Heavy Brigade Combat Team, 4th Infantry Division.

Fox served his first tour in Baqubah, Iraq from November 2005 until January 2007. During this time he received a Purple Heart for wounds received from the explosion of an Improvised Explosive Device (IED). He returned to Iraq for a second tour in 2008. Fox was Killed In Action on September 29, 2008, age twenty-one, in Adhamiyah, Iraq when he encountered small-arms fire while conducting a dismounted routine patrol. Fox had been approached by local children requesting water from the soldiers. After receiving permission to retrieve the bottles from the vehicle, he was shot in the right armpit by a sniper. This was one week before his twenty-second birthday.

Chris and I were in the same platoon during the tour he died on. Please contact me so I can help in any way I can.
–Submitted by Aaron Ziska