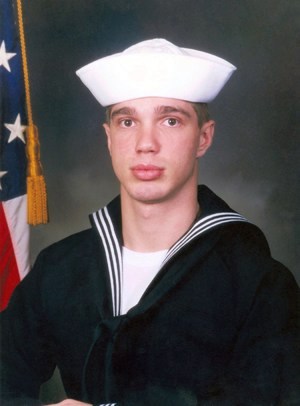 Jacob Watts asks about his father more often now. He remembers a few things – trips to the mall, rounds of video games and presents on Christmas and his birthday. “That’s when he brought me toys,” the 8-year-old said.

His grandmother, Brenda Rainwater, expects more questions as the years pass, questions about what kind of man his father was and how he died. Jacob was just 5 years old when his father, Petty Officer 2nd Class Chris Watts, died in a suicide terror attack near an oil terminal in the Persian Gulf near Basra, Iraq, on April 24, 2004. Watts, 28, was one of three servicemen killed in the attack – and the only sailor from East Tennessee to die in Iraq since the 2003 invasion.

His memory lingers in the minds of family members every day. They’ll think of him again as families across the country celebrate Memorial Day. Rainwater thinks about him every time she looks at her grandson. “It’s always foremost in our mind,” she said. “I don’t dwell on it a lot. At this point, there’s nothing you can do about it. But I guess we’re more fortunate than most people. We’ve got a little reminder of him sitting here.”

Jacob’s questions come at various times. He asks about things his father said and did and about whether he’ll see him again. “We’ll be driving places and he’ll remember going there with his daddy,” Rainwater said. “He’ll point and say, ‘My daddy took me there.’ ” She does her best to give each question an honest answer.

Christopher Eugene Watts grew up in Jefferson County and in Neon, Ky., where he graduated high school. His mother remembers him as a quiet boy who spent most of his time outdoors, fishing or filling notebooks with drawings and stories. Watts joined the Navy in 1995 at age 18. Rainwater believes he saw himself as part of a family tradition. “His father and grandfather had both been in the Navy,” she said. “He loved the Navy. He loved wearing his uniform. He thought he was doing what God wanted him to do.”

Watts was 22 when his son was born. He and Jacob’s mother later divorced, but Watts kept in touch with his son, visiting when he could. “The last time he called, he asked if we’d make sure Jacob went to Sunday school,” Rainwater said. “He always believed that was important.”

Watts had been in Iraq about three months aboard the USS Firebolt patrol ship when a boat approached the oil terminal that the ship was guarding April 24, 2004. The operator wouldn’t turn back, despite warnings from the ship. Watts went out with a boarding team to inspect the boat. As they drew near, it exploded. Jordanian extremists with ties to the Al-Qaida terrorist group later claimed responsibility.

“I’d always felt like he’d be safer on the water,” the mother said. “But those people over there don’t fight like we do.” Now she hangs on to each memory, hoping to pass them all down to her grandson. She’s kept every photograph of Watts, from faded images of him as a baby to his last photo in uniform to the picture of Jacob receiving the folded flag at the burial. Sometimes she looks through the photos. Sometimes Jacob looks with her, although he doesn’t sit still for long. The photos bring smiles and tears, sometimes both at once.

“He looks so much like Jacob,” Rainwater said as she thumbed through a scrapbook from her son’s childhood. “Chris won’t see him grow up. But I’m glad we have Jacob, because it’s like still having a part of Chris.”

Three years have passed since Watts died. The American death toll in Iraq has topped 3,400, including Watts and 29 soldiers and Marines with ties to East Tennessee.

Jacob lives with his mother, Kathy Durance, in Rutledge, where he’ll begin third grade this fall. He visits Rainwater and her husband, Carl, at least once a week at their home near Douglas Lake. He spends as much time as he can at the dock behind the house. Sometimes he fishes. Sometimes he catches frogs and turtles. Sometimes he just splashes in the mud and watches the ducks paddle.

“Chris always loved the water,” the grandmother said. “He always said he felt closer to God on the water, out there with no distractions.”

Now and then she forgets and calls Jacob by his father’s name. He doesn’t mind. “It’s OK,” he told her. “You can call me Chris.” She smiles as she watches him play. She warns him when he gets too far out in the water.

“He’s a typical boy, really,” Rainwater said. “He’s not afraid of anything. Sometimes I worry about him. His daddy was a little bit of a risk-taker, too.” She wonders what lies ahead – for her grandson and for the troops still overseas.

“I’d like to think that there’ll be no more lives lost, but that’s just wishful thinking,” she said. “There’s been too many deaths, too many children that have lost their dads. I wish there was an end in sight. But Chris saw the good in what he was doing, and I have to support that.” She believes she’ll understand it all one day. She believes Jacob will see his father again and learn the answers to all his questions. “I think he’ll see him one day, and I think he’ll recognize him,” she said. “That’s why I want him to be proud of what his daddy did and try to be someone his daddy could be proud of. I’ve told him that his daddy was a hero and that we expect a lot from him. He’ll never take that for granted. I’ll always remind him of that.”
By Matt Lakin, Knoxville News Sentinel, May 27, 2007