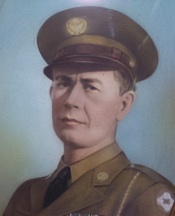 Christian was born in Benton, Saline County, Arkansas on 11 February 1910. Chick called the Cherokee Community between Jonesborough and Johnson City, Washington County, Tennessee home. He worked as a farmer before enlisting in the United States Army on 3 July 1942 at Fort Oglethorpe, Georgia.

Christian was assigned to the Headquarter Company, 2nd Battalion, 222nd Infantry Regiment, 42nd Infantry Division, The Rainbow Division. After completing training at Fort Gruber, Oklahoma the Rainbows set sail for Europe. Christian landed in France on 8 December 1944 and entered combat on 14 February 1945. His unit fought in numerous battles and engagements and for their bravery and actions against the enemy were awarded the Presidential Unit Citation.

They crossed the Rhine River on 31 March 1945 and entered Germany. After taking Donauworth on the Danube, Bavaria, Germany on 25 April 1945, Christian was killed in action while engaged with the enemy the next day, 26 April. He was 35 years of age and participated in two unit campaigns The Rhineland and Central Europe. For his actions he was awarded the Purple Heart Medal. Christian is interred at the Lorraine American Cemetery, Plot E, Row 43, Grave 20 in St. Avold, France.

Christian was the son of Julian Lequieu and Sarah Lou Dodgen. He was married to Ollie “Lillie” Mae Foster and they had two children.
-Submitted by Allen D. Jackson, USAF (Ret) 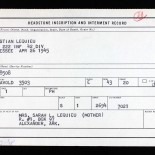