Private Burnette served with the 401st Bomber Group, 615th Bomb Squadron from Lewiston Army Air Base. He was one of twelve airmen killed in the crash of B-17F Flying Fortress #42-6062, near Winnett, Montana.

The Dayton Herald, Feb. 4, 1943
Sgt. Charles Burnett, son of Mrs. Gertie Burnett of Graysville and the late Virgil Burnett, was killed in an airplane crash in Bear Canyon, Calif., last Sunday. Details of the crash are incomplete, but he was one of three men killed. Three others parachuted to safety. Sgt. Burnett was a flight chief, stationed at Victoryville, Calif., having been in the service for two and a half years. He had recently returned to California from Graysville after the death of his father three weeks ago.
Besides his mother he is survived by three brothers, R.L. and Geroge Burnett of Graysville and Fred Burnett of Owensboror, Ky., and one sister, Mrs. C.V. Howard of Crossville. 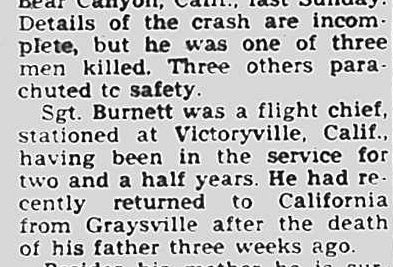