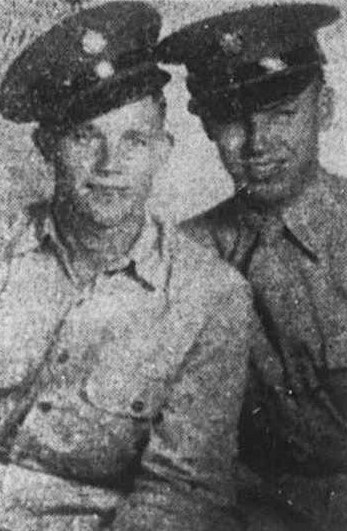 Charles Ray Bledsoe was born in 1918 in Tennessee, son of Mack Bledsoe. Brother of Jesse James Bledsoe who died in Normandy, France and who is buried at the Normandy American Cemetery.

Private Charles R. Bledsoe was assigned to the 120th Infantry Regiment, 30th Infantry Division. The 120th on the day before his death had relieved units of the 1st Division at Mortain, France on the Normandy Peninsula when the Germans launched a counterattack. He died on 7 August 1944 and is interred at H,9,2, Brittany American Cemetery, St James, France.

Rogersville Review, December 14, 1944
Pvt. Jesse James Bledsoe ( in foreground without tie) was killed in action July 20, 1944. He was the son of Mr. and Mrs. Mack Bledsoe of Rogersville. Pvt. Bledsoe entered the army June 5, 1942 and served five months overseas. Private Charlie Ray Bledsoe, a brother of the man pictured above, also gave his life for his country.