At 0036 November 15, 1942 the U.S.S. Preston was sunk while actively engaged in surface battle against Japanese naval forces. The engagement took place in the channel between Savo Island and Cape Esperance, Guadalcanal Island, Solomon Islands. Task Force Sixty-Four was formed in battle disposition in column in the following order. U.S.S. Walke, U.S.S. Benham, U.S.S. Preston, U.S.S. Gwin, U.S.S. Washington and U.S.S. South Dakota.
At 0026 the Gwin opened fire on the leading ship of the enemy group hugging the shore of Savo, range 10,000 yards. The target appeared to be a light cruiser, but was probably a heavy destroyer. Four minutes later, consecutive salvos struck the Japanese ship, which was now 8,500 yards away. Only one gun replied. Soon afterward the Gwin reported that she was being fired on by a Kuma-type light cruiser on her port quarter. A moment earlier the Preston sighted a ship off the southern shore off Savo on her starboard bow and opened fire with all four guns. The target, which seemed to be a destroyer-leader or light cruiser, was plainly visible in the moonlight, distant about 9,000 yards. The Preston scored hits after a few salvos, and her fire was soon returned. The Japanese vessel began to burn fiercely, and the Preston shifted to another ship in the shadow of Savo, range 8,000 yards. As she did so, she was struck by two projectiles, probably 6-inch, on the starboard side. One landed between the two fire-rooms, killing all personnel. Several fires broke out, including one in the TNT of warheads cracked open by the shock. The second stack fell onto the searchlight.
Meanwhile an enemy cruiser came in on the port side of the column, virtually undetected, and the U.S.S. Preston was hit on the port side by part of an 8-inch salvo (probably three shells). One shell penetrated to the engine room, one landed between the secondary control station and No. 3 gun, and one on No. 4 gun. Guns No. 1 and No. 2 were jammed in train. The whole afterpart of the ship soon became a mass of flaming wreckage. The Preston listed to starboard and settled by the stern. The commanding officer, Comdr. Max C. Stormes, gave the order to abandon ship. In half a minute the destroyer rolled over on her side and began to sink. The bow rose vertically and remained in that position about 10 minutes before the vessel slid beneath the surface. 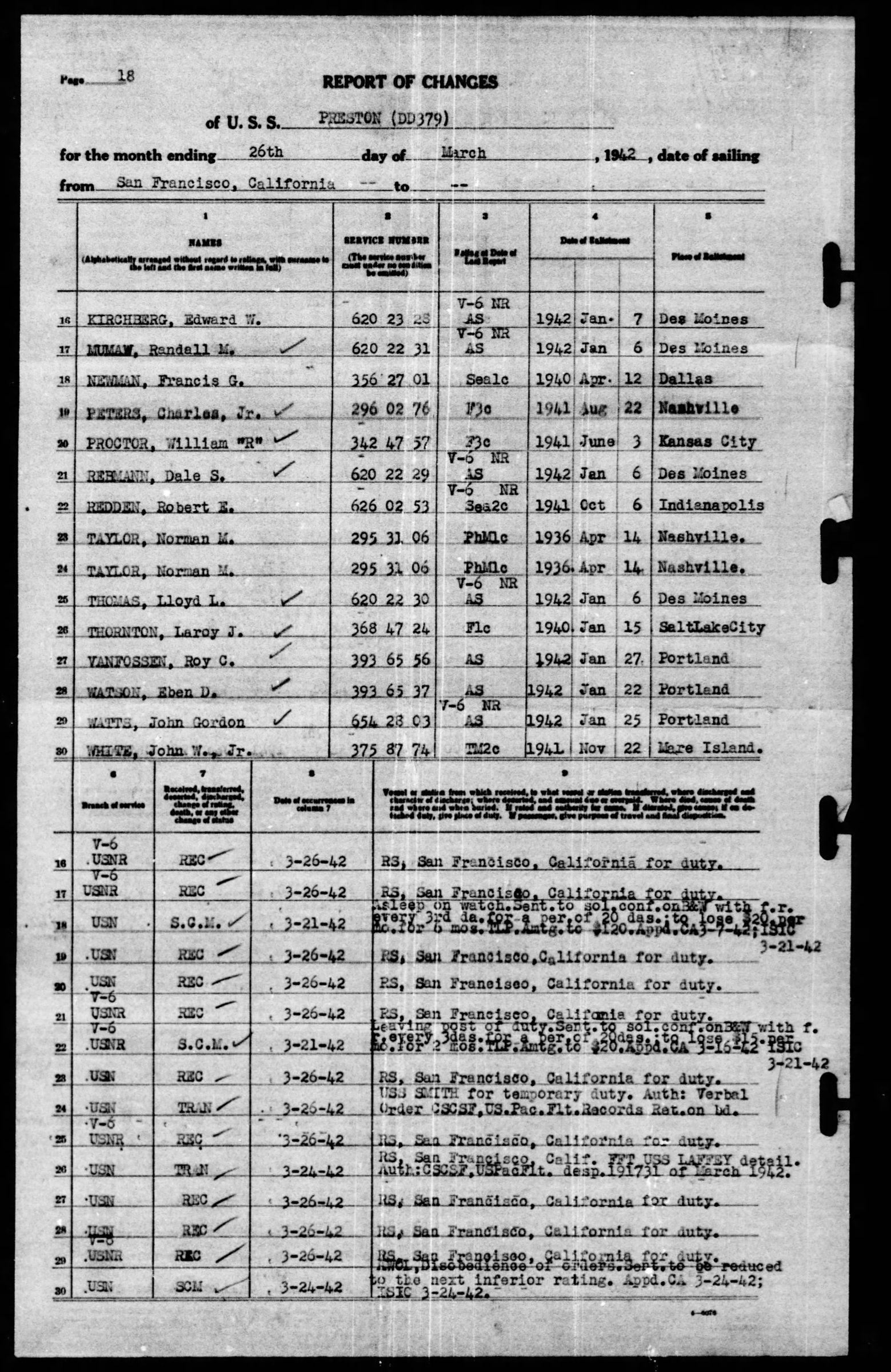