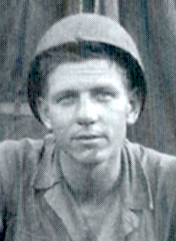 Sergeant Overbay was a member of the 14th Infantry Regiment, 25th Infantry Division. He was Wounded in Action while fighting the enemy in North Korea by an enemy land mine on March 7, 1952 and died of those wounds later that day. He entered the Army in January 1951 and took basic training at Camp Breckinridge, KY.
His brother Jacob K. Overbay was also killed in Korea.