Private First Class Charles Lee Lansdell was a member of Headquarters Company, 1st Battalion, 32nd Infantry Regiment, 7th Infantry Division. He was taken Prisoner of War while fighting the enemy in North Korea on December 2, 1950 and died while a prisoner on April 15, 1951. His name is inscribed on the Courts of the Missing at the Honolulu Memorial.

The Macon News, Georgia, 11 August 1953
Mr. and Mrs. Charles L. Lansdell Sr., of Rome, were informed by the Army that their son, Pvt. Charles L. Lansdell Jr., died of “Starvation and lack of medical care” while a prisoner of the Communists. The Army said word of Lansdell’s death was broughtback by repatriated prisoners. Mrs. Lansdell, who said she had been listening to the radio for word of her son’s return ever since the prisoner exchange began, refused to give up hope – “I’ll continue to listen, maybe he’s still alive.” 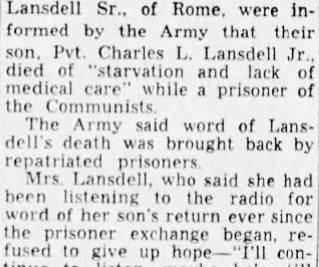