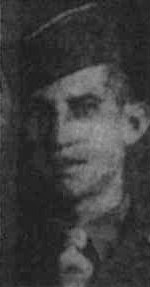 Private First Class Charles H. Black was born in 1926. He was the son of France and Hester Black. He had two brothers, Clyde Black and Paul L. Black. He lived in Knoxville with his parents; brothers; maternal grandparents, Tom and Annie Patterson; and aunts, Etta Patterson and Martha Davis.

Private First Class Black enlisted in the military on April 25, 1944 in Camp Shelby, Mississippi. He served in the European theater in the 262nd Infantry Regiment, 66th Infantry Division. He was killed in action on Monday, December 25, 1944.  On Christmas Eve 1944, the Belgium troopship Leopoldville, left the pier at Southampton, England with over 2,000 American soldiers assigned to the 66th Infantry Division and crossed the English Channel to France. Just 5 1/2 miles from its destination, Cherbourg, the Leopoldville was torpedoed and sunk by the German submarine U-486. There were 763 American soldiers killed and the bodies of 493 were never recovered from the Channels frigid 48 degree waters.
He is memorialized at Normandy American Cemetery in Colleville-sur-Mer, France.

The Knoxville Journal, February 2, 1945
Pfc. Charles H. Black, son of Mr. and Mrs. James F. Black of Concord, has been reported missing in action since Dec. 25 by the War Department, due to the destruction at sea of an American transport which was carrying troops to the European theater. Private Black had been in the service approximately seven months. He was employed by a beverage company here before entering service. 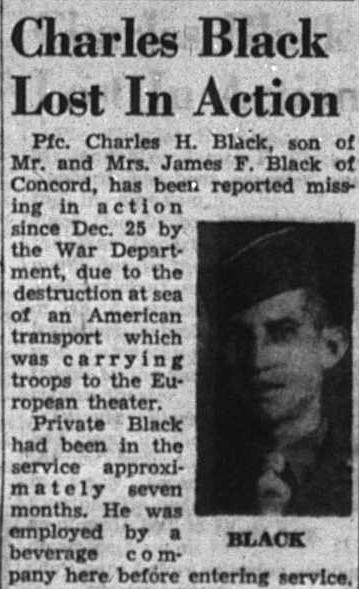