Length of service 0 years
His tour began on May 30, 1966
Casualty was on June 15, 1966
In , South Vietnam
Hostile, Ground Casualty
Gun, Small Arms fire
Body was recovered

Former Blount Man War Victim
Blount County relatives of a former Blount Countian have been notified of his death in action in Vietnam.
Pvt. Charles Woods of Corona, Calif, who was born in Blount County, died Wednesday, July 1, as result of wounds received during a combat mission against the Viet Cong. He was a member of Company B, First Battalion of the Fifth Cavalry Division.
Among his survivors are his parents, Mr. and Mrs. Albert Woods; grandmother, Mrs. Drew (Janie) Garner, Rt. 2, Louisville; uncles, Willie Garner of Louisville and Elmer Lee Garner of Friendsville, and brothers, William, Albert, and Johnny, all of California.
Woods’ mother is the former Ellen Pauline Garner of Blount County.
Woods, drafted into the Army in December, 1965, had gone to Vietnam May 9. He had been at a camp near Saigon since arrival in the war-torn country and had not been in combat until the action that caused his death.
He had moved to California from Blount County in 1949 with his parents. He received basic training at Fort Bliss, Tex. and advanced training at Fort Polk, La. 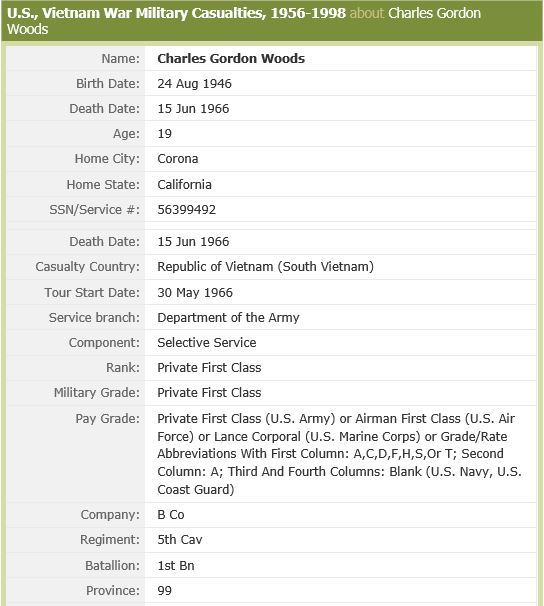