Charles E. Colvin was born in 1920 in Tennessee, son of Maude Colvin.

Technical Sergeant Charles E. Colvin, US Army Air Forces, was assigned to the 737th Bomber Squadron, 454th Bomber Group Heavy, flying B-24’s out of San Giovanni, Italy. He was a crewmember on aircraft 42-64495.

He was Killed in Action 26 July 1944 and is remembered on the Tablets of the Missing, Sicily-Rome American Cemetery, Nettuno, Italy.

The Dayton Herald, August 9, 1945
Word has been received by Mrs. Maude Colvin that her son, T-Sgt Charles E. Colving, who was missing in action over southern Yugoslavia on April 4, 1944, has been declared dead by the War Department. The plane was reported on fire 16 miles off the coast and all 10 members of the crew were reported missing. The family still has hopes that he may be alive. 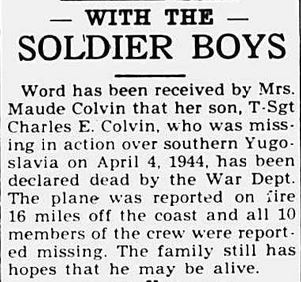