Corporal Charles Chadwell was assigned to the 31st Infantry Regiment, Philippine Scouts. The Japanese attacked the Philippines on the 8th of December 1941. After landing on the island, they drove Allied forces back to the Bataan Peninsula, where eventually the force was surrendered on the 9th of April 1942. The POWs were then forced on what became known as the Bataan Death March. 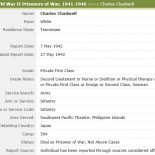 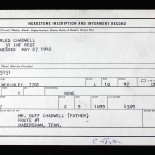