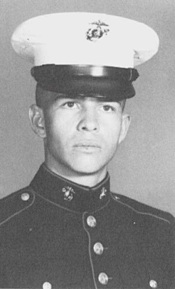 Lance Corporal Charles Camille Roberts was born on January 16, 1948, and was originally from Newport, Tennessee. He served his country in the Vietnam War in the United States Marine Corps, as a metal worker in C Company, 1st Tank Battalion, 1st Marine Division. On July 8, 1966, LCpl. Roberts was killed in a vehicle crash in Quang Nam, South Vietnam, while under hostile conditions; he was 18 years old at the time of his death. LCpl. Roberts is buried at Andrew Johnson National Cemetery in Greeneville, Tennessee, and is memorialized on the Vietnam Veterans Memorial on Panel 9E, Line 8.