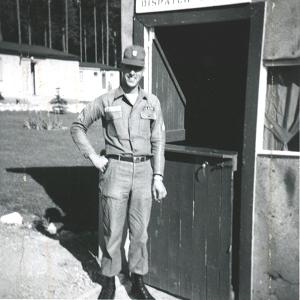 Staff Sergeant Charles Allen Raulston was a casualty of the Vietnam War. As a member of the Army, SSG Raulston served our country until March 21st, 1970 in Ninh Thuan, South Vietnam. He was 28 years old and was married. It was reported that Charles died from small arms fire or grenade. His body was recovered. Charles was born on August 22nd, 1941 in South Pittsburg, Tennessee. SSG Raulston is on panel 12W, line 031 of the Vietnam Memorial Wall in Washington D.C. He served our country for 6 years.

We were close friends. I think a lot about the good times we had. Especially about playing the guitars and singing.The songs we made up lasted forever. It’s hard to imagine that I am 62 now and you will forever be 28. We sacrificed so many good people. Sure do miss you. Rest easy Bro. Your buddy, Roger Stuckwisch, stckwsch@huntel.net

Caption for Photo: You didn’t get to see me or hold me in your arms. I was born 5 months too late. When I was about ten years old we lived about a mile from where you are buried. Sometimes I would ride my motorcycle there, even though I wasn’t supposed to go that far from home. I always wondered what you were like, everyone said you were fun to be around. I heard alot about you from my mom and your brothers, but I would have liked to have known you myself. I have seen alot of pictures of you when you were in the service. I will always rember the painting Granny Raulston had hanging on her wall. It was a young soldier with a tear running down his cheek. Every time I looked at it I wished I could have met you at least one time. I am posting a picture of you so everyone can see it too. I love you and I know Thomas, Scrooge, Jerry and Charlene miss you more than you could ever know. Your nephew Michael Jordan.

Chuck, I’m Rog Stuckwisch’s oldest boy. I’m 27 and in the Army. I’m an E-5 and at Ft. Riley. I’ve been to the Wall 3 times, and I’ve come each time to pay my respects. I rubbed your name the first time and sent it to Dad. He was really grateful for it. You know he can’t afford to get to Wash. D.C. And I really wish it was him who got there. We did see the Traveling Wall when it came to Norfolk. I hope he got to say whatever he wanted, or whatever. Well, I’ll talk to you later. Love, Jeff Stuckwisch.