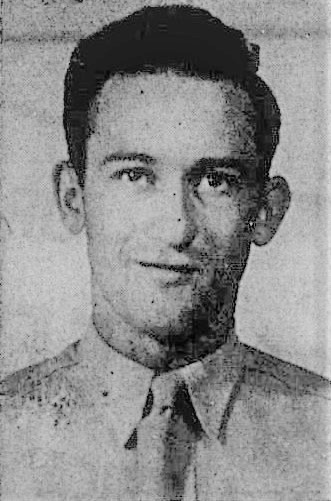 Cecil Buttram, son of Mr. and Mrs. A. J. Buttram, Cumberland Homesteads, reported missing in action in the North African Area as of Jan. 11, 1943. His body was never found on the field of battle.

He enlisted with the Air Corps on 7 January 1941 at Fort McPherson Atlanta in Georgia.

Crossville Chronicle, January 21, 1943
Cecil enlisted January 7, 1941 and made rapid advancement in his chosen line of work. His last trip home was in October, 1942. He, too, like Ben West Jr., was a member of the graduating class of Cumberland County High School in the spring of 1938. In fact he and Ben were very close friends, each having played football on the high school team. Other members of his family besides his parents, are a younger sister and a brother at hime, and his sister Mrs. Jay Daves.

Crossville Chronicle, July 7, 1949
Last rites for Tech. Sgt. Cecil G. Buttram were held at the Methodist Church, June 29.Interment followed in the city cemetery, with military rites by members of the West-Buttram Post VFW.
Cecil, a graduate of County High class of 1938, enlisted in the Air Corps on Jan. 7, 1941 and soon after basic training became a technical sergeant. He was reported “missing in action since January 11” in the North African area by the Adjutant General, the message being received here on January 15, 1943. Many months went by before his family received much additional information, some of which came in meager detals, until about six months ago, they were informed that his remains had been located in a small civilian cemetery in the northern part of Italy. His last visit home was in the fall of 1942. Now he has come home to rest near his loved ones.