2nd Lieutenant Cary Lewis Gray #O-810355 US Army Air Forces was assigned to the 513th Fighter Squadron, 406th Fighter Group of the 9th Air Force. He was a pilot flying the P-47 Thunderbolt with serial number 42-8544, out of Ashford, England.

The 513th was flying in support of the Normandy invasion during June 1944. On June 17th, the squadron had an armed reconnaissance mission in the Lessay area from which 2nd Lt. Carl Gray failed to return. He was seen to bail out of his plane 2 miles east of Cherbourg. His plane had evidently been hit by flak. On the 20th of June Lt Gray was listed as missing in action on the Squadron Morning Report. He is also listed as Carl L. Gray.

He is interred in the Normandy American Cemetery, A,19,20, Colleville-sur-Mer, France. 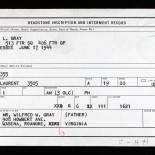 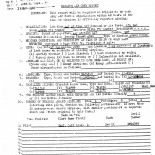