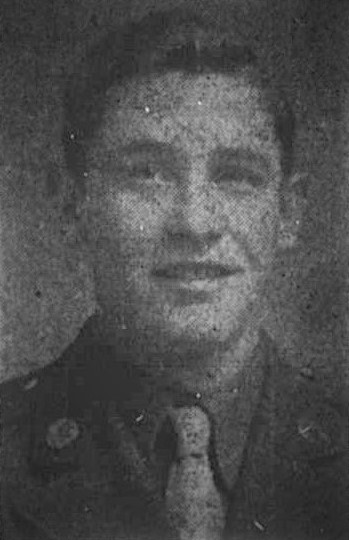 Sgt Simpson was killed in action in France. He is buried at Lawnville Cemetery, Roane County, Tennessee.

Rogersville Review, February 8, 1945
Sgt. Carson K. Simpson, son of Mr. and Mrs. F.H. Simpson of Kingston, Tenn, formerly of Hawkins county, was killed in action on D-Day, June 6, 1944 in Normandy, France. He was serving with the Armed Forces in the 16th Inf. Sgt. Simpson enlisted September 21, 1942 and took his basic training at Fort Knox, Ky. He spent three months in the States before being sent to North Africa where he saw action; then to Sicily where he went through the invasion there. Later he was sent to England where he spent seven months. Sgt. Simpson was 20 years of age and spent 21 months in the army.
Mrs. Simpson received the following letter from an English family, whom Sgt. Simpson had visited often while in England.

Dear Mr. and Mrs. Simpson:
Many thanks for your letter received Saturday 12th August, which you sent on the 15th July. We were all very sorry to hear about Carson but since I wrote my last letter to you, we knew he had been killed on D-Day, as all our letters to him were returned to us, with the news on them. We knew him for nearly seven months and he was loved and respected by all. He had been coming to our house nearly every day in that time so you can guess how we missed him and the news of his death upset us terribly. So we know how your family must have been.
The last time we saw him was on a Monday night, the 22nd of May. We had a party the same night and Carson and five more from his company were here. We have heard from one of their mothers too, saying her son was killed, a George Beebe; one is back wounded in England. My son-in-law, an American, is all right. Carson may have told you about the wedding on April 8 as he and his buddies were here. My own son, so far, is all right but he has been over France since D-Day about 15 times. You see he is in the R.A.Force.
Well, Mr. and Mrs. Simpson, no words of mine can express our sympathy to you, but if this is any consulation to you, your son Carson was a perfect gentleman. He had a kind word for every one and again I say he was loved and respected by all who knew him. As I am writing this, his picture is in front of me. We can hardly believe that the boys – it only seems yesterday that they were making fun – will never visit us again, but Mrs. Simpson we have some beautiful memories of them all.
I suppose you know he was made sergeant before they left England. I can see him now sewing his stripes on. Vera is my second eldest daughter. She married a sergeant Arnold S. Morrow of Rosemont, Pa. So perhaps in the near future, she may be able to visit you for if all goes well she will make her home in the USA.
Well, Mrs. Simpson, I have no more news, but believe me, we extend our deepest sympathy to you and all your family.
We remain, yours sincerely,
Mr. and Mrs. T. Crook and Family