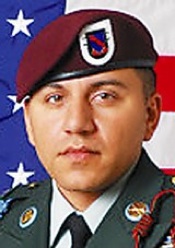 Carlos Santos-Silva followed his father’s footsteps into the Army.

“I’ll always remember him as a better soldier than I was,” said his father, a retired command sergeant major. “I looked forward to seeing him finish his career and achieve levels higher than I did.”

“It was a mounted patrol,” said Master Sgt. Gary Qualls, spokesman for the 82nd Airborne Division. “He was in the Humvee, but he didn’t make it.”

Santos-Silva had been stationed in Afghanistan since August with Company C of the 2nd Battalion, 508th Parachute Infantry Regiment, of the 82nd’s 4th Brigade Combat Team. He left behind a wife, Kristen, and a 9-year-old son, Cameron.

His parents, Francisco and Monika, live in Knoxville. The father last spoke to him about three weeks ago.

“He was doing well,” the father said. “He loved what he was doing, and he treated his soldiers like sons. His wife talked to him Sunday night. He would have been coming home in three weeks on leave, but he delayed that so he could be there for their 12th anniversary.”

Santos-Silva was born on an Army base in Germany and moved around the country as a boy, following his father’s postings at various bases. He joined the Army in August 1996, in time to serve with his father and brother at Fort Campbell, Ky.

“All three of us served there at the same time for three years,” the father said. “We were together there until 2000, when I retired and moved to Knoxville.”

Santos-Silva began his career as a medical supply specialist with the 101st and later became an infantryman with the 10th Mountain Division, based at Fort Drum, N.Y. He served on three deployments with the 10th – the first to Kosovo as a team leader in August 2001 and two more in Iraq. He joined the 82nd in February 2009.

Officers of the 82nd called him a “standard-bearer” for all a soldier should be.

“His men routinely looked to him for leadership guidance, which he readily gave,” said 1st Lt. Matthew Jarmon, his company’s executive officer. “He was loved by all in the battalion and made you proud to serve.”

Santos-Silva’s fellow soldiers plan to hold a memorial in his honor in Afghanistan.

Burial will be in Arlington National Cemetery in Virginia.