Private First Class Carl W. Cooke was assigned to 322nd Infantry Regiment, 81st Infantry Division. In September 1944 the 322nd was part of the invasion of Angaur, an island 6 miles from the island of Peleliu. The 81st then went across to Peleliu to support the 1st Marine Division. The battle of Peleliu was the most costly battle in the Pacific Theater.

PFC Cooke was killed in action 12 October 1944. He was later interred at the Manila American Cemetery, Phillippines, at l,11,77. 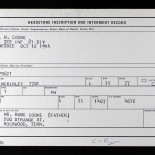