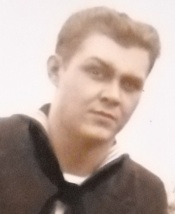 Carl was born in Sulphur Springs, Washington County, Tennessee on 20 June 1923. He attended Sulphur Springs High School, but left before graduation at age 17 to enlist in the United States Navy on 28 February 1941 in Nashville, Tennessee. He was then sent to Naval Ordnance Base Norfolk, Norfolk, Virginia for basic training, he arrived there on 1 March 1941.

After basic and advanced training, Carl was assigned to the USS Hornet (CV-8), a Yorktown-class aircraft carrier as a Seaman 2nd Class. He signed on with the rest of the crew on 20 October 1941, her commission date at Norfolk, Virginia. Carl saw a lot of action on the Hornet to include the loading of 16 B-25 Mitchell bombers at Naval Air Station Alameda, California on 1 April 1942. This was a mystery to them all, until the next day when they were out to sea and Captain Marc Mitscher opened the sealed orders and announced to the crew that the “Doolittle Raiders” were going to bomb mainland Japan. On 18 April, he watched those bombers fly off the ship towards Japan and afterwards they sailed for Pearl Harbor. 28 May, now a Seaman 1st Class, Carl and the Hornet set sail to join in the battles against the Japanese. On 6 June, the Battle of Midway and after that the Solomon Campaigns August-October 1942. Carl’s rating changed on 1 July 1942 to Gunner’s Mate 3rd Class, he was now a Petty Officer. At the Battle of Santa Cruz Island on 26 October, the Hornet was so badly damaged it was decided to scuttle her, but before doing so, the Japanese returned and finished her off. Carl, a wounded sailor was returned to the states and healed up in the Naval Hospital at Philadelphia, Pennsylvania.

After his release from the hospital, Carl signed aboard the newly commissioned (25 February 1943) USS Princeton (CVL-23) an Independence-class aircraft carrier at Philadelphia on 19 March 1943. They engaged the Japanese in numerous strikes and supported our Marines in their landings. Having survived the first Battle of the Philippine Sea, she wasn’t so lucky in the second or the Battle of Leyte Gulf. On 24 October 1944, she was hit by a single Japanese dive bomber, dropping a single bomb that struck her in the most vulnerable of spots, right between her elevators. The ensuing fires and explosions sent her to the bottom in less than eight hours. Carl wounded again was picked up by the USS Irwin (DD-794) along with others of his crew and taken back to Pearl Harbor on 29 October for treatment at the Naval Hospital there.

After being released again, Carl was assigned to the USS Bairoko (CV-115) a Commencement-class escort carrier at Bremerton, Washington. He signed aboard on 4 May 1945 and she was commissioned later on 16 July 1945, too late to take any active part in World War II. Carl came home on leave in September 1945 and just before his return from leave date on 28 September, he was driving his girl friend back to Johnson City from Sulphur Springs, when another vehicle cut them off. Carl lost control at a bridge and after striking the bridge, his girl friend was thrown from the vehicle before it struck a tree. She helped Carl back up to the road and they caught a bus back to Jonesborough. At Jonesborough, Carl collapsed and was taken by ambulance to the Appalachian Hospital in Johnson City. After that he was moved to the Veteran’s Hospital at Mountain Home were he died from internal chest injuries on that Friday morning at 0430 hours (4:30am).

He was 22 years old and the son of Daniel Eugene Ferguson and Blanche Lavina Wheelock. Carl’s younger brother: Billy Joe Ferguson is a U.S. Navy veteran having served during World War II as a Fireman Second class aboard the USS Charles J. Badger (DD-675), a Fletcher-class Destroyer. Billy passed away on 26 September 2022. 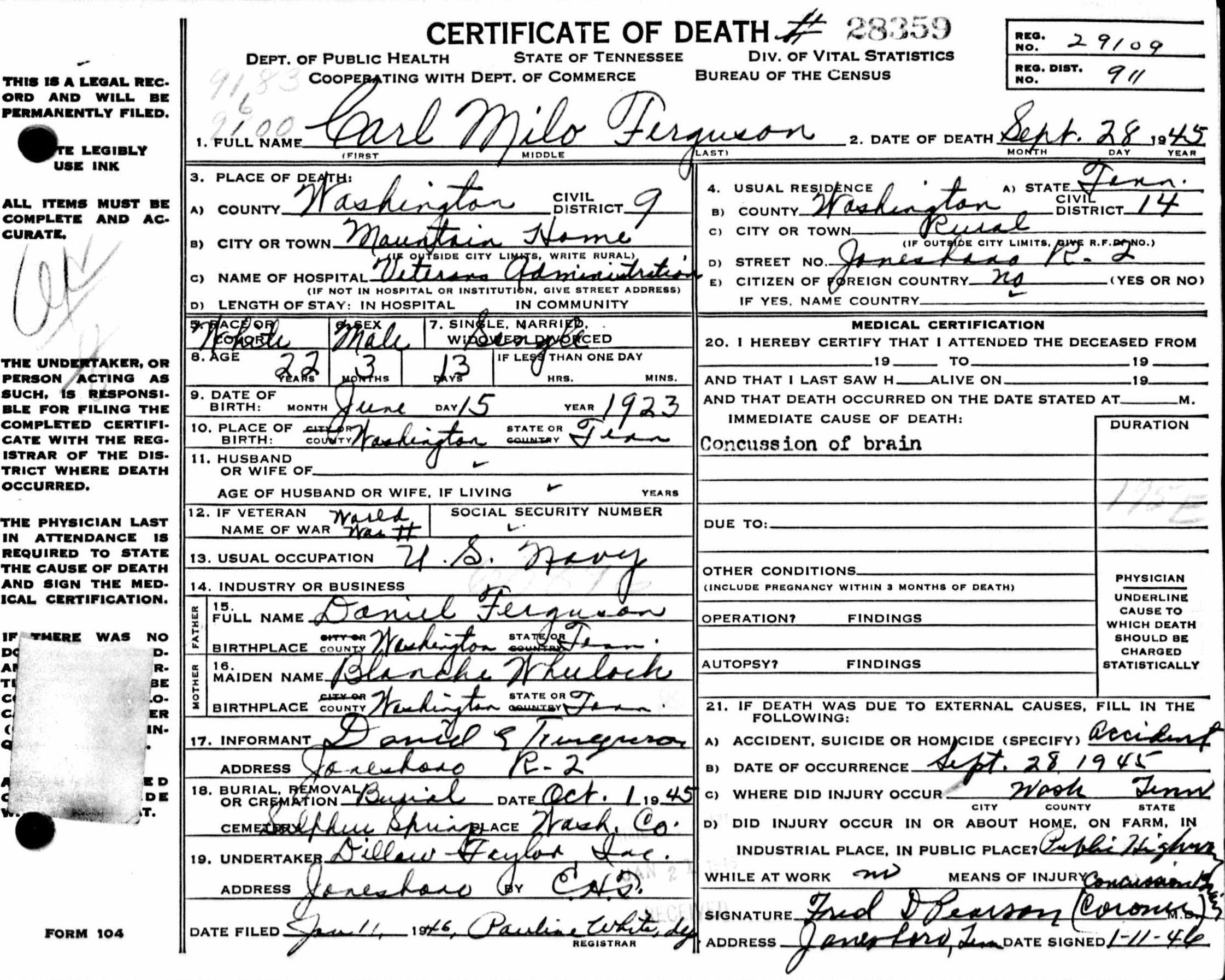 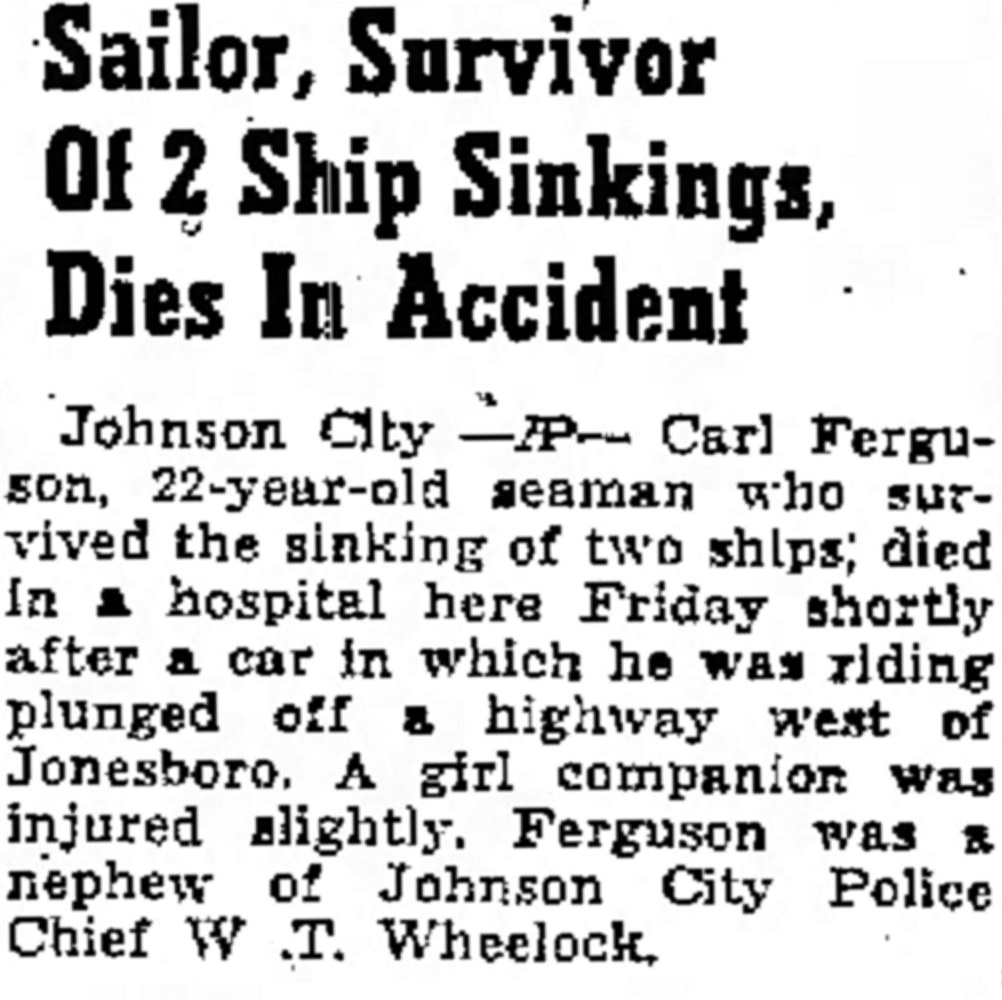