A sailor from Tennessee became the second fatality of a head-on collision during a high-speed chase with police Tuesday. Carl L. Russell, 22, of LaFollette, Tenn. died in a hospital of injuries received in the crash. He was attached to the Naval Air Station near hear.
Marine Pvt. Henry Baugus, 22, of Tennille, Ga., died at the scene of the crash. He drove through a roadblock and smashed into a car containing four sailors as he was chased by city and Dougherty County officers. The other sailors were reported in good condition. 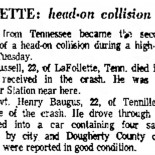