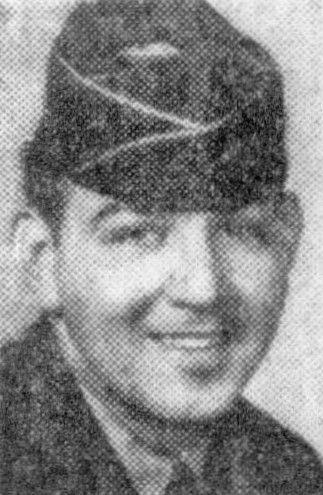 Carl Edward DeFord was the son of Dennie D. and Pearl A. DeFord of 1330 Tennessee Avenue. Carl was born April 12, 1928, in Knoxville and was the only child born to the DeFord family. He was a member of Tennessee Avenue Baptist Church and attended Rule High School for three years. During his time at Rule High School, he was a member of the football team and enjoyed other outdoor sports. Carl joined the Unites States Army and left Knoxville on March 10, 1951. He arrived in Korea on April 13, 1951 and was assigned to the 35th Regiment of the 25th Division also known as the Tropic Lightning Division.

Corporal DeFord was involved with three major battles and was awarded battle stars for his actions. On September 21, 1951, he was in front of a patrol in the Kumwha area of North Korea. Kumwha was at the eastern tip of the Iron Triangle in central North Korea. The Iron Triangle was an area of heavy combat between the two forces and resulted in heavy losses. The triangle was defined between Kumwha to the east, Chorwon to the West, and Pyonggang at the Northern tip. While leading the patrol, Corporal DeFord discovered some wires at his forward position. He called back to his fellow comrades and told them to be on the alert. An explosion occurred seconds later and Corporal DeFord was killed by the blast. Corporal DeFord is believed to have set off a trip wire. As a result of his warning, the other members of his patrol were not injured. The men of his patrol were so moved by his sacrifice that they sent flowers and words of sympathy to the family at the time of his funeral. Corporal Carl DeFord was placed on the troop transport ship Loma Victory and returned to San Francisco, California just before Christmas 1951. He was transported from California to Knoxville arriving on the Southern Railway. Funeral Services were held Sunday, January 13, 1952, at Tennessee Avenue Baptist Church and he was laid to rest in Lynnhurst Cemetery, Knoxville.

The Knoxville News-Sentinel, October 11, 1951
Carl E. DeFord, former Rule High School football player, has been killed in action in Korea, his parents, Mr. and Mrs. Dennie DeFord have learned. Mr. and Mrs. DeFord, 128 Tennessee Avenue, first received a War Department telegram that their son had been missing in action since Sept. 21. Then last Friday they received a second telegram which said he had been killed on that date. Mrs. DeFord said she had received a letter from her son the day before he was killed. He wrote of cold nights on the battlefield and said he was with a tank outfit in the Kumyah area. He said he expected to go to Pangyang the next day with the tanks. Only last June he was promoted to private first class, and his corporal stripes followed soon. Young DeFord worked for a Knoxville vencer company before joining the Army in September, 1950. He had been in Korea since April 13.
Mrs. DeFord said her son once had written about being trapped between two Mountains withh Red soldiers on all sides. He and other American soldiers were pinned down by enemy fire throughout the night. Cpl. De Ford leaves only his parents. He was a member of Tennessee Avenue Baptist Church. 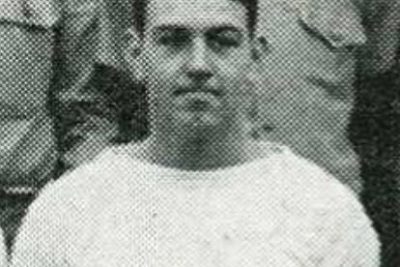 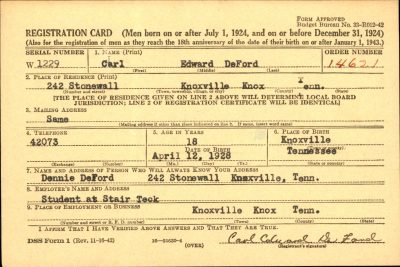 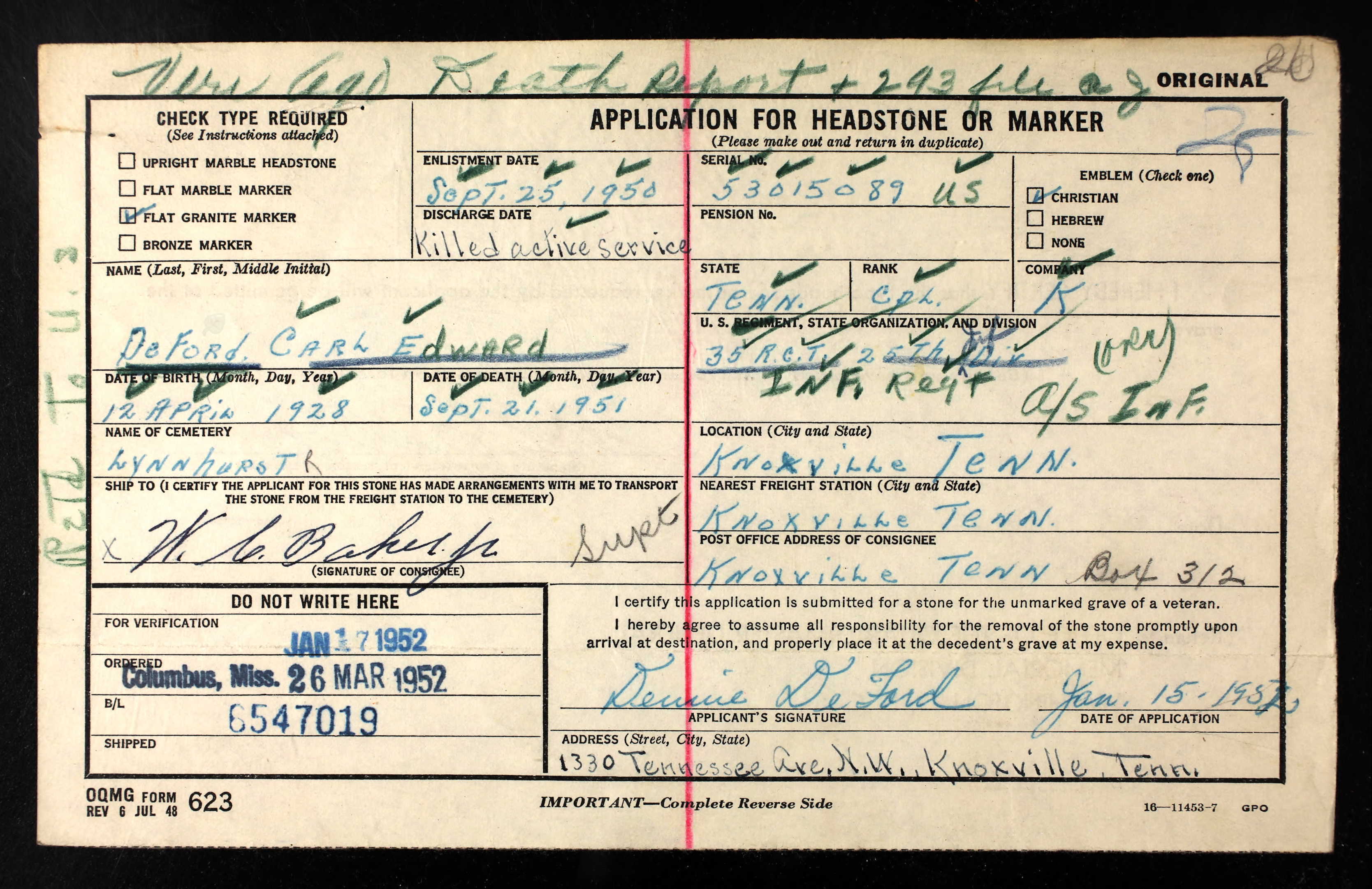 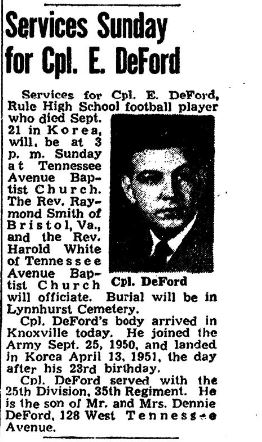 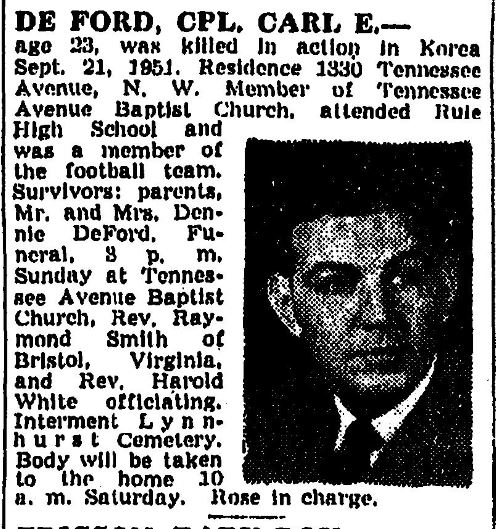 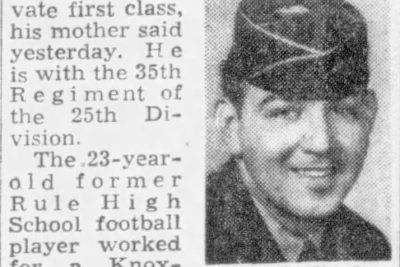 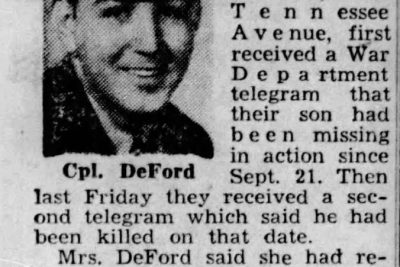 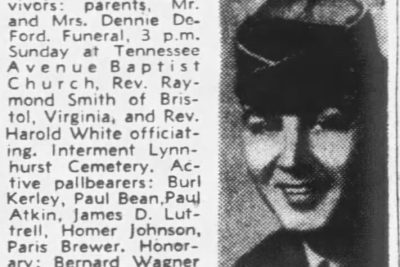