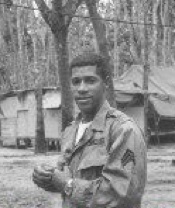 SSgt. Calvin Fielder was born on October 25, 1931, and was originally from Chattanooga, Tennessee. He served his country in the Vietnam War as a 16-year veteran of the United States Army in 173RD AHC, 11TH CAB, 1 AVN BDE. His tour in Vietnam began on December 23, 1965. On November 19, 1968, SSgt. Fielder was killed in a helicopter crash over Tay Ninh, South Vietnam, at the age of 37. He is memorialized on the Vietnam Veterans Memorial on Panel 38W, Line 10. The following is a tribute to SSgt. Fielder:

SSgt Fielder was flying as a passenger in a 173rd UH-1 helicopter on that fateful morning. He was going on R & R to Japan and was dressed in a Class A uniform. I was a Crew Engineer in the 173rd Assault Helicopter Company. The last time I saw him we were taking off from Lai Khe Airfield. Sergeant Fielder was boarding his aircraft to depart for a vacation. He was in 173rd’s Maintenance Platoon, thus the irony that the aircraft he was flying on suffered a mechanical failure resulting in the crash that took his life.
You were a fine man, Sergeant Fielder, my mentor, my friend and my brother-in-arms I will never forget you. May God rest your soul.
-Submitted by John C. Jackson, MSG ret, US Army

My best friend and mentor back in 1968 was Calvin Fielder. I never called him anything, but Sargent Fielder as he was an E6, SSGT, so no idea if his friends called him “Cal” or something? I was 20; he was in his mid-thirties, pushing 40. I think he had just turned 37 when he died. He was on his 3rd tour in Vietnam. We were in 3 Corps, at Lai Khe Airfield. I know he got the Air Medal with 2 Oakleaf clusters which is like getting the medal a second and third time. I think he also had a Bronze Star. He had a girlfriend in Japan he planned to marry. He was a stickler for detail and I saw him inspecting the aircraft he was goin to be flying on, a UH-1D helicopter. As I flew by for our morning sorties. He was in a CIass A uniform which was tan in color. He felt the quality of maintenance was low so he was going be sure the aircraft he flew on was o.k. I laughed as I saw him checking the hanger bearing that support the tail rotor driveshaft.

I remember going to the Mess Hall at noon when we got back. Someone asked, “Did we have a ship down today?” His buddy said “Ya, Sgt Fielder was killed. It was due to a hanger bearing failure.” That was Nov 19th, 1868. That memory haunts me horribly. I also know he is on the Viet Nam Memorial Wall but no idea where. I thought that it was nice that we listed him Vietnam Memorial Wall6 because I saw the accident report and he was listed as a “Pac,” or passenger of the downed aircraft. So, he didn’t die fighting the enemy but, on a trip, to see his girlfriend in Japan. No one but me knows this.

I loved Sgt. Fielder. He mentored me, gave me sound advice and was my best friend. He was a black guy and I remember him saying in southern drawl, “Let’s go look at this raggedy-assed helicopter” that we were working on together. 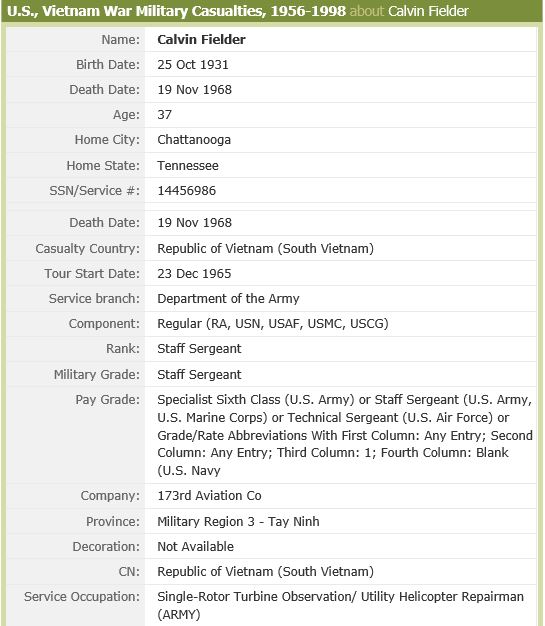