Carl Cagle died non battle on 14 April 1952 while in service. He was a sergeant  with the  Air Force and is buried at Bybee, Cocke County, TN.

The Newport Times, April 16, 1952
Sgt. Carl Cagle, Newport and Bybee citizen, was dead upon arrival at Knoxville General hospital early this morning when his 1950 model car struck a concrete abuttment about 5 miles east of Knoxville. A companion, Everett L. Fox, of Knoxville, received a broken anckle and face and body lacerations, and moments later, a North Carolina vehicle plowed into the wreckage, injuring two other slightly.
According to Deputy Sheriff J.C. Witt of Knox County, Sgt Cagle may have gone to sleep while returning to his Knoxville base from Newport, where hes pent the Easter week-end. The care veered to the left side of the road, striking the corner of a bridge. Sgt. Cagle was thrown from the vehicle and his body was found some distance away. Sgt. Cagle, 26, is not stationed at the Municap Airport in Knoxville with the Army Air Corps. He is a graduate of Cocke County High School where he was very active in sports. He is well known in Cocke County, participating in the Bybee community where he has many friends. Surviving are: father, Mr. Walter Cagle; one brother, Oris, also in the Air Force in Geogia; two sisters, Mrs. Eilene Cureton of White Pine , and Mrs. Marie Holt of Bybee. 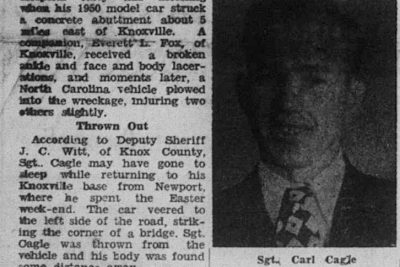 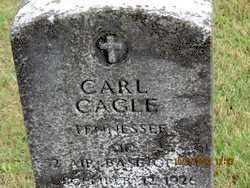