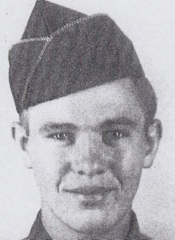 Private Charles Kenneth Patterson of Lake City was born on May 25, 1924. He was the son of Tommy and Della Jones Patterson. He was the brother of Calvin Patterson and the uncle of J. J. Patterson. He served in the European/Mediterranean theater of the war in Company A, 120th Engineer Combat Battalion. He was killed in action in Italy on December 20, 1943. He was initially buried in Italy, then was repatriated to Laurel Grove Cemetery in Briceville, Tennessee on September 29, 1948.

Clinton Courier News, Sept. 30, 1948
Pvt. Charles K. Patterson, 24, died on Dec. 20, 1943 in Italy. The body arrived in LaFollette on Monday afternoon and was taken to the home of his parents, Mr. and Mrs. Tommy Patterson, in Briceville. He is survived by his parents, three brothers; J.C., Calvin and Tommy Lee all of Briceville; three sisters: Mrs. Claude Taylor, Lois Mae Patterson and Beatrice Patterson all of Briceville. Interment was in the Laurel Grove Cemetery with military honors at the grave. 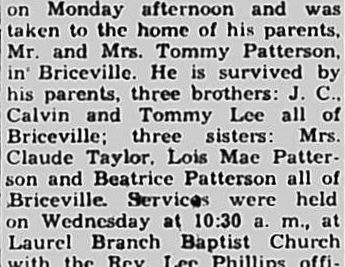