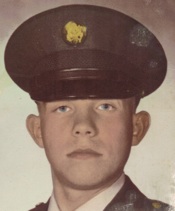 The Kingsport Times, 19 July 1967
A 19-year-old Knoxville soldier has been killed in action in Vietnam, his parents were notified.
Pfc. Charles Edward Merriman, son of Mrs. Mary Jane Merriman, was killed Sunday by gunshot wounds while engaged in hostile action with the enemy.
Merriman, a 1966 graduate of Carter High School, had been in the Army eight monts and had been in Vietnam for nearly three months.