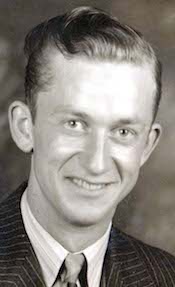 Dale was my uncle. He was born in Johnson Co., Tennessee in 1922. Dale was in the 414th infantry during World War 2. His basic training was at Camp Adair, Oregon. They received a 30 day notice that would go to Camp Carson, Colorado for training. While at Camp Carson, Dale and a buddy were given a weekend pass. They were returning to base when the motorcycle they were riding was hit head on by a civilian auto that was on the wrong side of the road. Both soldiers were killed. Dale is buried at Elk Mills, Tennessee. That was in July of 1944. He was 22 years old. He died 5 years before I was born.
-Submitted by Phil Pearson