A Department of Defense effort that began in 2015 to use science to solve one of our country’s prolonged mysteries has identified the remains of a Navy sailor from Athens, Tennessee, who died in the surprise Japanese attack on Pearl Harbor more than eight decades ago.

By matching DNA from his family, scientists were able to identify Oliver K. Burger, who was buried as one of the many unknown casualties. He will be honored later this month at the National Memorial Cemetery in Honolulu, Hawaii.

Burger was among the nearly 400 USS Oklahoma service members who were unaccounted for when the battleship was torpedoed and capsized during the surprise attack on Dec. 7, 1941. He was just 26 years old.

Born in Athens and living in San Pedro, California, at the time of the attack, Burger served as a water tender 1st class on the Oklahoma and was responsible for taking charge of the boiler room. The petty officer rating is now known as machinist’s mate.

Though it has been 80 years since the Pearl Harbor attack that catapulted the United States into World War II, scientists identified Burger’s remains in November 2020 through the Department of Defense’s USS Oklahoma Project.

“Being able to recover and identify the remains of sailors aid in closure for the families and it is especially important to the Navy to honor these sailors who paid the ultimate sacrifice and gave their lives for our country,” said Capt. Robert McMahon, director of Navy casualty.

Scientists at the Defense POW/MIA Accounting Agency have been using DNA references from participating USS Oklahoma families to identify the remains. Three hundred fifty-five have been identified so far.

Burger will receive a full military service at the National Memorial Cemetery in Hawaii on Aug. 31.

His remains were previously interred at the National Memorial Cemetery in 1950, along with the other unidentified remains from the USS Oklahoma. The 45 graves consisted of 61 caskets known collectively as the “Punchbowl.”

Burger’s wife, Mary, died in 1997. His daughter, Glenna Mae, was born in 1940, but Knox News couldn’t track her path through life. Burger’s family elected not to be contacted by reporters. 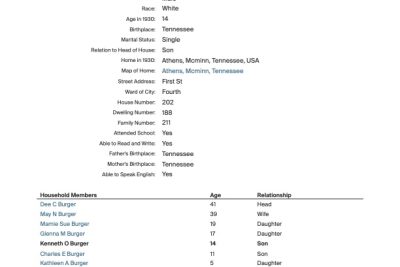